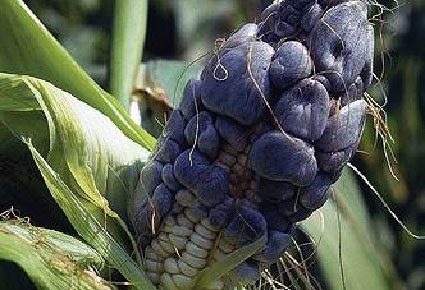 Joe Spraker, UW-Madison Plant Pathology Revised:  6/7/2013 Item number:  XHT1230 What is huitlacoche?  Huitlacoche is the Native American name for the mushroom-like masses found on the ears of corn and corn relatives (collectively called teosinte).  Huitlacoche can be a major problem for sweet corn growers where it is referred to as common corn smut (see […]

Karen Delahaut, Walt Stevenson Revised:  10/24/2011 Item number:  A3282 Scab, also called gummosis, is one of the most important diseases affecting vine crops. In cool moist environments, scab can be a yield- limiting disease. While the pathogen infects a broad range of vine crops including pumpkins, squash, and melons, it is rarely a problem on […]

Karen Delahaut, Walt Stevenson Revised:  10/24/2011 Item number:  A3805 Powdery mildew is a foliar disease that occurs late in the season on cucumbers, gourds, muskmelons, pumpkins, and squash. It is less common on watermelon. On susceptible crops, this disease is often severe enough to significantly reduce yields by reducing the number and size of fruit. […]

Karen Delahaut, Walt Stevenson Revised:  10/24/2011 Item number:  A3279 Anthracnose is a destructive fungal disease of the foliage, stems, and fruit of cucumbers, gourds, muskmelons, and watermelons. Find out how to spot, prevent, and control this disorder in your garden. Click on links to read this publication.   Download Article

Karen Delahaut, Walt Stevenson Revised:  10/24/2011 Item number:  A3801 Angular leaf spot is a bacterial disease that can be economically damaging to cucumbers, honeydew melon, and zucchini squash grown in Wisconsin. The bacterium Pseudomonas syringae pv. lachrymans infects leaves, stems, and fruit. Read this fact sheet to find out how to spot, prevent, and control […]

Karen Delahaut, Walt Stevenson Revised:  10/24/2011 Item number:  A3799 Even though symptoms may not appear until after harvest, many of the disease-causing organisms that cause fruit rot infect tomatoes before they ripened. Once fruit is infected, little can be done during harvest or storage to reduce the damage. Most fruit rot fungi and bacteria also […]