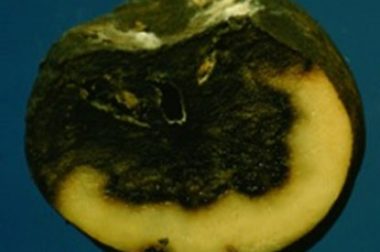 Bacterial soft rots cause the collapse of plant parts such as potato tubers. (Photo courtesy: UW-Madison/Extension)

What is bacterial soft rot?  Bacterial soft rots are a group of diseases that cause more crop loss worldwide than any other bacterial disease.  Bacterial soft rots damage succulent plant parts such as fruits, tubers, stems and bulbs of plants in nearly every plant family.  Soft rot bacteria degrade pectate molecules that bind plant cells together, causing plant structure to eventually fall apart.  Woody tissues are not susceptible.  Soft rots commonly affect vegetables such as potato, carrot, tomato, cucurbits (e.g., cucumbers, melons, squash, pumpkins), and cruciferous crops (e.g., cabbage, cauliflower, bok choy).  These diseases can occur on crops in the field, as well as on harvested crops in storage.  Rot can occur over a wide temperature range, with the worst decay between 70 and 80°F, particularly when oxygen is limited.

What does bacterial soft rot look like?  Initially, bacterial soft rots cause water-soaked spots.  These spots enlarge over time and become sunken and soft.  Interior tissues beneath the spots become mushy and discolored, with the discoloration ranging anywhere from cream to black.  Seepage from affected areas is common.  Soft rots are known for a strong, disagreeable odor that accompanies the breakdown of plant tissue.

Where does bacterial soft rot come from?  Soft rots are caused by several bacteria, most commonly Pectobacterium carotovorum (previously called Erwinia carotovora), Dickeya dadantii (previously called Erwinia chrysanthemi), and certain species of Pseudomonas, Bacillus and Clostridium.  These bacteria can enter plants through wounds caused by tools, insects, severe weather such as hail, or through natural openings.  The bacteria can be spread from plant to plant by insects, on contaminated tools, or by movement of infested plant debris, soil, or contaminated water.  Bacterial soft rots tend to be more of a problem during wet weather and can be more severe when plants lack sufficient calcium.

How do I save a plant with bacterial soft rot?  Once soft rot bacteria have infected plant tissue, there are no treatments.  Immediately remove and discard infected plants or plant parts.  DO NOT bury or compost this material.

How do I avoid problems with bacterial soft rot in the future?  Avoiding wet conditions is key for managing soft rot.  Plant vegetables in well- drained soils and control watering times and amounts, making sure plants are watered adequately (but not excessively) and uniformly.  DO NOT crowd plants; wider spacing will promote more rapid drying of plants and soil.  Make sure that soil fertility (particularly soil calcium) is optimal for the vegetables that you are growing based on a soil nutrient test.  Add calcium (e.g., bone meal) at planting as needed.

Avoid damaging vegetables when weeding and during harvest.  Minimize any handling of soft-rotted plants, but if you must handle such plants (e.g., to remove them from the garden), wash your hands afterwards with soap and water.  Decontaminate garden tools before and after use by treating them for at least 30 seconds with 10% bleach or preferably (because of its less corrosive properties), 70% alcohol.  Rubbing alcohol and many spray disinfectants typically contain approximately 70% alcohol.  Also, keep insects that can wound vegetables such as cabbage maggot under control (see University of Wisconsin Garden Facts XHT1030 “Cabbage Maggot” for details).

Harvest only during dry conditions.  Closely inspect vegetables from infected gardens that will go into long-term storage and be sure not to store any diseased vegetables.  Cure vegetables where appropriate prior to storage.  Store vegetables in a cool, dry, well-aerated place to suppress bacterial growth.

At the end of the growing season, remove any infested plant debris remaining in your garden, and destroy the material by burning or landfilling it.  If soft rot is a serious, recurring problem in an area in your garden, DO NOT grow susceptible crops in that area for a minimum of three years