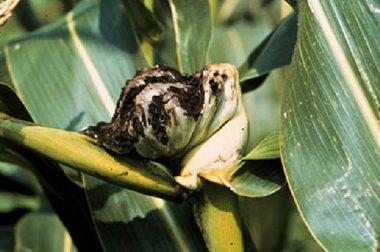 What is common corn smut?  Common corn smut is a fungal disease that affects field, pop, and sweet corn, as well as the corn relative teosinte (Zea mexicana).  Common corn smut is generally not economically significant except in sweet corn where relatively low levels of disease make the crop aesthetically unappealing for fresh market sale and difficult to process for freezing or canning.  Interestingly, the early stages of common corn smut are eaten as a delicacy in Mexico where the disease is referred to as huitlacoche (see University of Wisconsin Garden Facts XHT1230, “Huitlacoche”)

What does common corn smut look like? Common corn smut leads to tumor-like swellings (i.e., galls) on corn ears, kernels, tassels, husks, leaves, stalks, buds, and less frequently on aerial roots.  Some galls (particularly those on leaves) are small and hard.  More typically, however, galls are fleshy and smooth, silvery-white to green, and can be four to five inches in diameter.  As fleshy galls mature, their outer surfaces become papery and brittle, and their inner tissues become powdery and black.  Galls eventually rupture, releasing the powder (i.e., the spores of the causal fungus).

Where does common corn smut come from?  Common corn smut is caused by the fungus Ustilago maydis, which can survive for several years as spores in soil and corn residue.  Spores are spread by wind or through water splashing up onto young plants.  Spores can also be spread through the manure of animals that have eaten infected corn.  U. maydis most typically infects corn ears via the silks.  The fungus can also enter plants through wounds caused by insect feeding, hail, or injuries from machinery. Infection is favored by warm weather (79-93°F) and moderate rainfall.  Corn grown in low fertility soils or soils with excessive nitrogen also have a greater likelihood of infection.

How do I save plants with common corn smut?  Once galls have formed, treatment is not available.  Remove and burn (where allowed by local ordinance) or bury smut galls before they burst to prevent spores from spreading and overwintering.  In order for eradication to be effective, however, you will need to coordinate efforts with your neighbors.  Fungicides are currently not an effective control against common smut.

How do I avoid problems with common corn smut in the future?  Plant resistant corn varieties whenever possible.  Check with your favorite sweet corn seed supplier for available varieties.  Also, avoid injuring plants (e.g., when weeding) to reduce possible entry points for the common corn smut fungus.  Maintain well-balanced soil fertility (specifically nitrogen) based on a soil nutrient test.  Use crop rotation (see University of Wisconsin Garden Facts XHT1210 “Using Crop Rotation in the Home Vegetable Garden” for details) to allow time for corn smut spores to naturally die off in the soil.