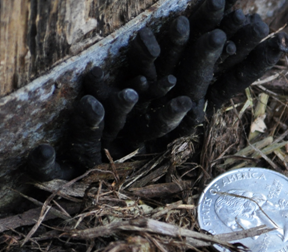 Dead man’s fingers growing from mulch next to a barrel planter. (Photo courtesy of Dick Becker)

What is dead man’s fingers?  Dead man’s fingers is the name of a mushroom-like fungal growth that can be found at the base of dead or dying trees and shrubs, as well as wood objects (e.g., wood barrels) that are in contact with soil.  Some types of dead man’s fingers are produced by wood-decomposing fungi.  Others are produced by fungi that cause black root rot.  This disease typically is a problem on stressed trees or shrubs, including apple, crabapple, pear, cherry, plum, American elm, Norway maple and honeylocust.

What does dead man’s fingers look like?  The most recognizable form of dead man’s fingers is black and club-shaped with a white interior.  It appears as solitary or clustered irregularly-shaped “fingers” about 1½ to 4 inches tall, growing on or near dead or dying wood.  In the spring, the early stage of the “fingers” is pale, often bluish with white tips.  Disease-causing species of the fungus can form a sheath around roots that is at first pale.  This sheath later becomes black and crusty, hiding a lighter interior.  This sheath/crust can sometimes be seen if soil is brushed away from tree/shrub roots.  Trees/shrubs with above-ground symptoms of infection may show decline, dieback, slowed growth, and basal cankers.  Infected apple trees may produce an abnormally large crop of smaller than normal-sized fruits.

Where does dead man’s fingers come from?  Dead man’s fingers is the sexual reproductive structure of the fungus Xylaria.  Sexual spores (called ascospores) are produced inside each club-like “finger” and released through a tiny hole in the top.  The “fingers” can release these spores for several months or years.  In the spring, Xylaria can produce asexual spores (called conidia) anywhere on its surface.  Xylaria also produces threadlike structures (called hyphae) that grow through dead or dying wood.  Xylaria can survive as hyphae in roots for up to 10 years, and can spread from plant to plant via hyphae when plant roots come in contact with each other.

How can I save a tree with dead man’s fingers?  In urban settings, dead man’s fingers may grow from wood mulch, and may not be an indication of disease.  If the “fingers” are considered unsightly, they simply can be removed and discarded.  If dead man’s fingers form around or near the base of an apple, crabapple or other known susceptible host, the fungus may be infecting the tree causing black root rot.  In such a situation, by the time the characteristic “fingers” appear, the infection is well advanced.  An infected tree should be carefully removed including the stump and as much of the root system as possible.  DO NOT use wood from Xylaria-infected trees for mulch.  There are no fungicides registered in Wisconsin for treatment of black root rot.

How can I prevent dead man’s fingers from being a problem in the future?  DO NOT plant susceptible trees or shrubs in a site where dead man’s fingers has been observed.  In addition, make sure that susceptible trees/shrubs in other locations are well watered, fertilized, mulched and otherwise maintained to reduce stresses that might predispose them to infection by disease-causing species of Xylaria.  Unfortunately, resistant varieties/cultivars of trees and shrubs known to be susceptible to Xylaria (see above) are not available.