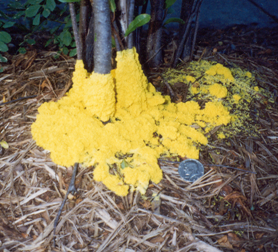 A dog vomit slime mold is shown spreading across mulch and up the base of a shrub.

What is a slime mold?  Slime molds are members of a shape-shifting group of organisms called myxomycetes.  These organisms are found all over the world, even in deserts, high altitudes, and on the edges of snowbanks.  Although they often resemble fungi, slime molds are more closely related to amoebas and certain seaweeds.

What does a slime mold look like?  A slime mold spends most of its life as a lumpy mass of protoplasm, called a plasmodium, that moves and eats like an amoeba.  It may be white, yellow, orange, or red. The color of a particular species can vary slightly with temperature, pH, and the substances the plasmodium eats.  One very common slime mold, Fuligo septica, looks like dog vomit or scrambled eggs, from which it derives its common names.  Others resemble a network of veins or a fan. In the course of a few hours a slime mold can transform from its amoeba-like phase into its fungus-like phase, which produces spores.

Where do slime molds come from?  The most common slime molds in Wisconsin love moist, shady places like crevices in rotting logs, leaf letter, and bark mulch.  Spores of slime molds are resistant to adverse conditions and will germinate after a heavy rain.  The plasmodium forms from many individual swimming cells called swarm cells.  The plasmodium can move at a very slow rate, feeding on bacteria, other microorganisms, and organic matter.  Changes in moisture or temperature, or exhaustion of its food supply can cause the slime mold to move to a drier, more exposed location to produce spores.

What do I do with a slime mold in my garden or lawn?  Slime molds do not cause diseases of plants or turf.  They do use leaves and stems as surfaces on which to grow and can block out sunlight leading to leaf-yellowing.  The best way to get rid of a slime mold is to break it up and dry it out.  Rake up and dispose of slime molds on bark mulch.  For slime molds on turf, mow the lawn, and rake up the thatch.  Alternatively, you may want to enjoy a slime mold if you find one in your yard.  These complex organisms are fascinating to observe and can be “captured” and grown indoors as a science project.