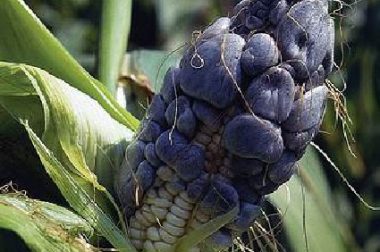 Huitlacoche can be an excellent source of carbohydrates, proteins, fats, vitamins and minerals. (photo courtesy of CIMMYT)

What is huitlacoche?  Huitlacoche is the Native American name for the mushroom-like masses found on the ears of corn and corn relatives (collectively called teosinte).  Huitlacoche can be a major problem for sweet corn growers where it is referred to as common corn smut (see University of Wisconsin Garden Facts XHT1221 “Common Corn Smut”), causing yield and quality losses.  However, huitlacoche is also considered a culinary delicacy in many cultures.  In Mexico, huitlacoche is considered a gift from the gods, and is commercially available in many markets.  In the United States, huitlacoche is less common commercially, but can be found in the ethnic sections of some grocery stores.

What does huitlacoche look like?  Huitlacoche is a tumor-like growth (called a gall) that forms from corn kernels.  Galls can swell to ½ to 11 inches in diameter.  Huitlacoche initially has a streaked, silvery appearance, but eventually develops a scorched, blackened look.  Huitlacoche galls remain smooth until they rupture releasing a black, inky material that eventually becomes sooty, coarse and dry.

Where does huitlacoche come from?  Huitlacoche is actually a corn disease, caused by the fungus Ustilago maydis.  The black, inky material released by huitlacoche is a mass of spores produced by the causal fungus.  These spores can be easily moved by wind and can survive for many years in soil.  Normally U. maydis infects unpollinated corn silks, but the fungus also can infect through wounds caused by heavy wind, heavy rain, or hail.

What can I do with huitlacoche if I find it?  Huitlacoche is edible, has a smoky, earthy taste, and is an excellent source of carbohydrates, proteins, fats, vitamins and minerals.  To enjoy the flavor of huitlacoche to its fullest, harvest galls before they begin to dry, but after they have turned dark grey.  DO NOT use galls that are powdery inside when split open.  If you prefer not to harvest your own huitlacoche, you can purchase canned hutlacoche at your local Mexican market.  Although use of hutlacoche as a food originated in Mesoamerica (i.e., parts of Mexico and Central America), like many other gourmet mushrooms, chefs have begun to incorporate huitlacoche into non-traditional dishes including macaroni and cheese, and even ice cream.  See http://www.sweetcorn.illinois.edu/Common-smut/Recipes.htm for sample huitlacoche recipes.

How do I encourage more huitlacoche to form?  While huitlacoche can be harvested from naturally infected ears of corn, you can increase your yield by artificial inoculation.  Prior to pollination, soak corn silks with huitlacoche spores mixed with water.  After inoculation, water and fertilize corn plants for optimal growth.  If your inoculation is successful, galls should start to form within two weeks.  Galls are usually best if harvested 16 to18 days after inoculation.