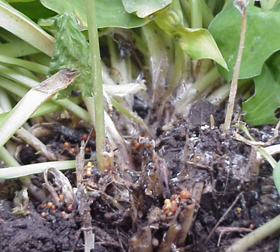 What is Southern blight?  Southern blight is a lethal fungal disease that is most common in the tropics and subtropics.  This disease causes damage in the southern U.S. and can even cause problems in temperate locations like Wisconsin during periods of warm, moist weather.  Southern blight has a wide host range, affecting over 500 plant species.  Vegetable and fruit hosts include tomato, pepper, onion, beet, rhubarb, strawberry, lettuce, cucumber, melon, carrot, asparagus and parsley.  Ornamental hosts include aster, black-eyed Susan, dahlia, daylily, gladiolus, hosta, impatiens, peony, petunia, rose, salvia, sedum and viola.  Small woody trees and shrubs can be affected as well.

What does Southern blight look like?  Southern blight initially leads to a water-soaked appearance on lower leaves or water-soaked lesions (spots) on lower stems.  Any plant part that is near or in contact with the soil may become infected.  Infected plants yellow and wilt, often within days of infection, particularly when the weather is moist and warm (80 to 95°F).  Fruit rots, crown rots and root rots are also typical symptoms of the disease.  Thick mats of white fungal threads (called mycelia) may grow from infected tissue, radiating from the plant onto the soil surface.  Sclerotia (small spherical structures that are about the size of mustard seeds) develop on infected tissue and on the soil surface.  Sclerotia range in color from light tan to dark reddish-brown to black.

Where does Southern blight come from?  Southern blight is caused by the fungus Sclerotium rolfsii, which lives in soil, on plants (including weeds), and in plant debris.  The fungus can be spread through movement of infested soil and plant debris, on infected plants, in contaminated irrigation water, and through use of contaminated tools.  In Wisconsin, S. rolfsii most likely enters gardens on infected nursery stock or infested mulch.  Freezing temperatures will kill S. rolfsii mycelia, but sclerotia can survive temperatures as low as approximately 14ºF.

How can I save a plant with Southern blight?  Identify the extent of an infestation based on visible dead/dying plants, fungal mycelia and sclerotia.  Remove all plants (including roots), as well as three inches of soil, from at least 12 inches beyond the infested area.  Start at the edge of the infested area and work toward the center.  Bag all plants and soil and dispose of these materials in a landfill. 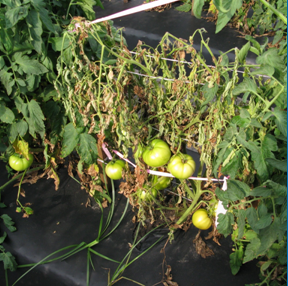 Southern blight can be a serious disease of vegetables, including tomatoes, leading to wilting and plant death. (Photo courtesy of Gary E. Vallad, University of Florida)

How can I prevent Southern blight in the future?  Inspect new plants for sclerotia and mycelia of S. rolfsii prior to transplanting.  Bag and dispose of diseased plants as described above.  Use high-quality mulches (e.g., shredded oak bark mulch, red cedar mulch) in your garden and avoid any mulches that you suspect might be contaminated with S. rolfsii.  S. rolfsii thrives under moist conditions.  Therefore, thin existing gardens or space plants farther apart in new gardens to improve airflow and promote more rapid drying of foliage and soil.Turn any remaining soil in the infested area eight to 12 inches to bury any sclerotia that you may have missed.  This will reduce the length of time that the sclerotia will survive.  Grow non-susceptible plants (e.g., larger woody ornamentals) in the affected area for two to three years to allow time for sclerotia to die naturally.  Fungicides containing azoles (e.g., propiconazole, tebuconazole), fludioxonil, flutolanil, mancozeb, PCNB, strobilurins (e.g., azoxystrobin, fluoxastrobin), thiophanate-methyl, and triadimefon are all labeled for Southern blight control, but may have varying levels of effectiveness.  All of these products will likely be more effective if applied as preventive treatments rather than in an attempt to “cure” existing disease.  If you decide to use fungicides, DO NOT use one active ingredient for all treatments.  Instead, alternate the use of two or more unrelated active ingredients to help minimize problems with fungicide-resistant strains of S. rolfsii.  DO NOT alternate active ingredients that are chemically related (e.g., propiconazole and tebuconazole, or azoxystrobin and fluoxastrobin).  Be sure to read and follow all label instructions of the fungicide(s) that you select to ensure that you use the fungicide(s) in the safest and most effective manner possible.