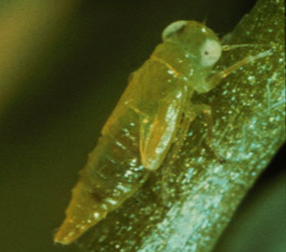 The potato leafhopper (Empoasca fabae) is a serious, annual pest of snap beans and potatoes in Wisconsin.  Damage caused by leafhoppers includes stunting, browning of leaves, and reduced vigor.  A wide range of plants serve as hosts for the potato leafhopper.  Host plants include alfalfa, apples, all types of beans, clover, dahlia, eggplant, potatoes, rhubarb, soybeans, strawberries, and other bedding plants.

Appearance:  Potato leafhoppers are small (1/8 inch long), bright green, wedge-shaped insects with whitish spots on their head and thorax (i.e., upper body).  They have piercing-sucking mouthparts and commonly jump, fly, or crawl when disturbed.  Nymphs are similar in appearance to the adults but lack fully developed wings.

Symptoms and Effects:  Both adults and nymphs feed by inserting their mouthparts into the vascular (i.e., water-conducting) tissue of the plant and extracting sap.  Damage results from blockage of vascular tissue which permanently reduces the plant’s ability of photosynthesize efficiently.  The first symptom of potato leafhopper injury is a brown, triangular lesion at the leaflet tip.  As the symptoms develop, lesions spread backward and inward from the margin, eventually destroying the entire leaf.  The burned appearance of the foliage is where “hopperburn”, the term for this damage, is derived.  Plants become stunted and yellow, and leaves curl upward at the margins.  Premature death may occur large numbers of potato leafhoppers are present.  Injury develops most rapidly during hot, dry weather.  Unfortunately, yield loss often occurs even before the development of obvious symptoms.  Plants may show little evidence of hopperburn, and yet yield losses can be substantial.

Life Cycle:  Potato leafhoppers do not overwinter in Wisconsin; they are blown into the state each spring on southerly winds.  Large populations of leafhoppers migrate from alfalfa fields in June and early July causing populations to seemingly “explode” overnight.  Adult females insert white eggs into the stems or large leaf veins of susceptible crops.  Each female lays approximately three eggs each day for approximately one month.  Nymphs hatch seven to 10 days later and molt five times over a period of 12 to 15 days before turning into adults.  There are typically two generations per year in Wisconsin and populations decline significantly in August.

Scouting Suggestions:  Snap beans and potatoes should be scouted regularly for leafhopper activity.  Leafhoppers tend to migrate from alfalfa into other crops in early summer after alfalfa has been cut.  This is the key time to watch for early migrations into vegetable plantings.  Commercial vegetable growers should use an insect sweep net to monitor their fields, taking 25 sweeps per sample site and sampling from at least five sites per 30 acres.  Small gardens or farms should be monitored by carefully turning over 25 leaves selected from the middle of the plant and counting nymphs and adults.  Potato leafhopper threshold levels for several crops are listed below 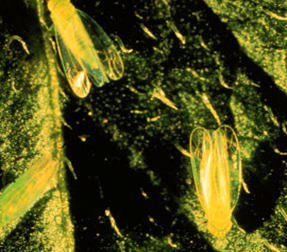