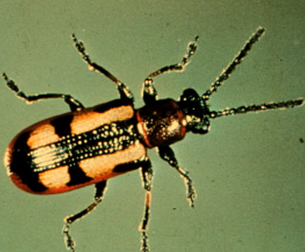 Control:  Scouting for asparagus beetles and their damage is important in controlling this pest.  Monitor plants in the afternoon when beetles are most active.  Examine 100 crowns for the presence of beetles or eggs.  Economic thresholds for plants monitored during the afternoon are indicated in the table below.  If you monitor during the morning hours you should reduce your treatment threshold to account for the lower activity level of the beetles at this time of day.  To achieve significant control, you should control adults early in the season before they lay eggs.

Destruction of crop residues will eliminate overwintering sites for asparagus beetles.  In addition, there is a tiny parasitic wasp (Tetrastichus asparagi) that is an egg parasite of the common asparagus beetle.  This wasp is capable of reducing common asparagus beetle populations by up to 70%.  If insecticides are needed to reduce beetle populations to below threshold levels, then spot treat areas where threshold levels have been exceeded.  Keep in mind that new plantings tolerate less injury than older stands.

For more information on asparagus beetles: See UW-Extension Bulletin A3422, or contact your county Extension agent. 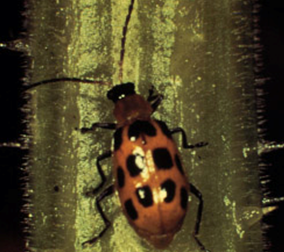