Bean leaf beetles (Cerotoma trifurcate) are becoming more of a problem in Wisconsin than they have been in the past. Warmer winters may allow overwintering adults to survive in record numbers. Host plants include snap and lima beans, peas, and soybeans, as well as leguminous weeds.

Appearance:
Adult bean leaf beetles are 1∕4 inch long and range in color from yellow-green to red. They have four black spots on their backs, a black triangle on the wing covers behind the head, and a black band surrounding the outer margins of their wings.  The larvae are slender and white with dark areas on both ends.

Symptoms and Effects:
Adult bean leaf beetles chew small holes into the leaves while feeding from the lower leaf surface.  Adult feeding on young plants can reduce vigor and yield.  They can also feed on developing pods causing distortions, as well as creating a point of entry for disease organisms.  The larvae feed on the roots and nodules as well as the stems below the soil line and may girdle small plants.

Life Cycle:
The beetles overwinter as adults in leaf litter, plant debris, weeds, and grassy fields near fields that have had beans planted in them the previous year.  They become active in mid-May to early June when the weather warms.  Before the host crop emerges, bean leaf beetles feed on alfalfa, clover, and prairie legumes.  The beetles often migrate into vegetable crops when nearby alfalfa is cut.  After mating, females lay small clusters of lemon-shaped, orange eggs in the soil near the base of the plant.  The eggs hatch in one to three weeks and the larvae immediately begin feeding on the roots and underground stems.  The larvae feed for 30 days before pupating.  First generation adults appear in mid-July.  A second generation of adults appears in late August and September. These become the overwintering adults that will emerge the following spring.

Scouting Suggestions:
Preliminary thresholds established by the University of Minnesota indicate that beans should be treated when there are six to 10 shot holes per leaf on 10% of the plants, when plants are between the seedling stage, and when they produce their first trifoliate leaves.

Cultural:
Bean leaf beetles are very difficult to control without chemicals.  Because of the highly mobile nature of the beetles, control options are limited.  Discourage overwintering beetles by destroying plant debris and keeping vegetation mowed near susceptible crops.  Beans planted in early to mid-June are more likely to escape damage by the overwin¬tering adults.  In small gardens, floating row covers placed over the crop at planting will exclude the beetles from getting to the crop.  Unfortunately, this technique is not practical in large plantings.  Be sure to firmly secure all edges of the row cover so the beetles don’t crawl beneath.

Chemical:
Commercial snap bean growers who have had problems with bean leaf beetles in the past should use an imidicloprid insecticidal seed treatment at planting.  Insecticides used to control other insects such as the European corn borer will also control bean leaf beetles.  Organic growers can use Rotenone, pyrethrum or neem, and those not growing organically can also use carbaryl and permethrin.  It’s important to treat early and get thorough coverage of the foliage particularly the lower leaf surface.  Refer to UW-Extension publication A3422 “Commercial Vegetable Production in Wisconsin” for a list of recommended products. 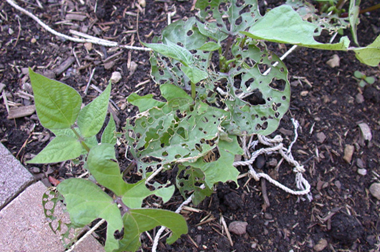