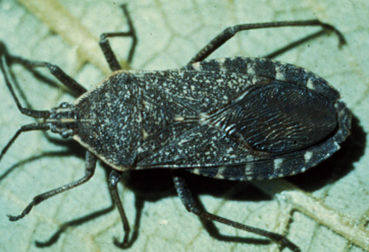 Squash bugs (Anasa tristis) are an emerging problem in Wisconsin.  In recent years, these insects have become more prevalent, causing damage to vine crops in commercial fields and home gardens alike.  Squash bugs will feed on all vine crops, but prefer pumpkins and squash, followed by gourds and melons.

Appearance:  Adult squash bugs are dark brown mottled with grey, and flattened.  When crushed, they give off a disagreeable odor.  Squash bug eggs are a metallic bronze color, and are laid in clusters between leaf veins on the lower leaf surface of susceptible plants.  Young nymphs are pale green to white, and somewhat resemble aphids in shape.  Later instar nymphs are grayish-white with black legs.

Symptoms and Effects:  Large numbers of overwintering adults can cause serious stand losses to transplants and seedlings.  Squash bugs feed on plant sap, and initially, feeding leads to yellow spotting on leaves.  As the damage progresses, the spots become brown and dry.  Vine-feeding results in a wilting of the vine from the point of feeding outward.  Large numbers of insects can cause entire plants to wilt.  Cosmetic damage to developing fruit may occur from adult or nymph feeding making the fruit unmarketable.

Life Cycle:  There is one generation of squash bugs per year in Wisconsin.  Eggs of the squash bug are laid in clusters on the lower leaf surface near leaf veins.  The eggs hatch one to two weeks later, in late June to early July.  Immature squash bugs undergo five molts before reaching maturity.  Adults appear in late July to early August and enter a resting state called diapause, in the fall.  These overwintering adults become active in the spring and lay the next season’s eggs.  Warm winter weather favors the survival of overwintering adults, increasing the likelihood of outbreaks the subsequent summer.

Control:  The key to management of squash bugs is early detection.  Even though large populations of squash bugs are not likely to occur early in the season, growers should check their transplants or newly emerged seedlings for the presence of adults.  Destroy crop residue in the fall to reduce the number of overwintering adults.  Crop rotation will also reduce the incidence of infestation.

When plants are flowering, controls should be implemented when a threshold of more than one egg mass per plant is detected.  If not controlled at this time, plant damage and yield loss will result.  Check the lower leaf surface for squash bug eggs.  Young nymphs are most susceptible to control while adults are more difficult to control.  Pyrethroid insecticides such as permethrin are recommended for control.  However, these products are less effective when temperatures are above 80°F.  Because of their protected location on the lower leaf surface, control of the squash bug may be difficult.  In addition, in recent years, squash bugs have developed resistance to some insecticides.  Refer to UWEX publication A3422 “Commercial Vegetable Production in Wisconsin” for a list of registered insecticides.