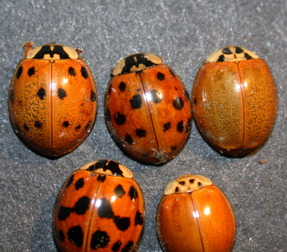 The multicolored Asian lady beetle has only been recorded in large numbers in Wisconsin since 1994.  It is not known exactly how this insect became established in the United States, but there have been numerous attempts (from 1916 until 1985) to establish this species as a biological control agent for pecan aphids (the multicolored Asian lady beetle is an important predator of scale and aphid pests on trees in Asia).  The first specimens recovered in the US were collected in Louisiana during 1988.  Since then the beetle has increased its distribution to include all states east of the Mississippi.

The multicolored Asian lady beetle is oval, convex, 1∕3 inch long, and pale orange in color with 19 black spots on the wing covers.  The 19 spots are arranged as a row of five spots, followed by two rows of six spots, and a fourth row of two spots.  Some beetles may lack these spots, or may only have traces of four to six spots on the wing covers.  In Asia, the multicolored Asian lady beetle occurs in at least 100 different color forms including black forms with orange spots.

Multicolored Asian lady beetles congregate on homes or other buildings in search of overwintering sites.  They usually select the west or southwest side of a building as the initial congregation area.  Many of these beetles leave these sites on their own by nightfall, and most of the beetles move into leaf litter, underneath boards or logs, or to other protected areas after the first frost.  Some however, may move inside buildings.

As with many insect pests, prevention is the key to keeping multicolored Asian lady beetles from getting into homes.  One of the best ways to limit unwanted intrusions by insects is to deny them entry — a procedure known as pest proofing.  Many pests seek refuge in homes and other buildings in response to changes in weather, such as extended periods of rain or drought, or the onset of cooler temperatures in autumn.  Taking steps to block their entry before they end up inside can greatly reduce the chances of future sightings.

1. Make certain doors are tight fitting.  Install door sweeps or thresholds at the base of all exterior entry doors.  While lying on the floor, check for light filtering under doors.  Gaps of 1∕16 inch or less will permit entry.  Apply caulk (see #2 below) along bottom outside edge and sides of door thresholds to exclude ants and other small insects.  Gaps under sliding glass doors can be sealed by lining the bottom track with ½ to ¾ inch-wide foam weather stripping.  Repair gaps and tears in door screens.

2. Make certain windows are properly sealed.  Caulk cracks around windows (as well as around doors, fascia boards, etc).  Use a good quality silicone or acrylic latex caulk.  Although somewhat less flexible than pure silicone, latex-type caulks clean up easily with water and can be painted.  Caulks that dry clear are often easier to use than pigmented caulks since they don’t show mistakes.  Repair gaps and tears in window screens.

3. Seal utility openings.  Check where pipes and wires enter the foundation, and siding around outdoor faucets, gas meters, clothes dryer vents, and telephone/cable TV wires for gaps.  These are common entry points for such pests as rodents, ants, spiders and yellow jackets.  Holes can be plugged with caulk, cement, urethane expandable foam, steel wool, copper mesh (Stuffit), or other suitable sealant.  Ventilation openings in attics should also be screened or sealed as needed.

Equipment and materials mentioned above can be purchased at most home improvement or hardware stores.

If lady beetles cannot be excluded by pest proofing, there are a number of insecticide sprays that can be applied to the outside of buildings during late September or early October to kill and repel the beetles before they get in.  The most effective spays are various synthetic pyrethroids such as permethrin, cypermethrin, cyfluthrin, deltamethrin and lamda-cyhalothrin.  Concentrate applications of these products along doors, windows, and overhangs on the south, west and east sides of the structure.  Two or more gallons of spray may be needed to get thorough coverage.  You may wish to hire a professional pest control company to make the application.

When all else fails, a vacuum cleaner or broom is often the best response once beetles have come indoors.  Beetles can also be collected by hand and released outside.  Lady beetles defend themselves by bleeding from their joints.  Therefore, if handled too roughly they can stain carpets, walls or curtains. 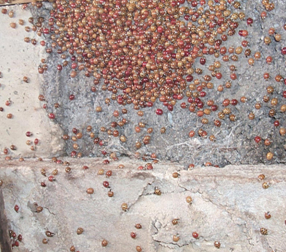