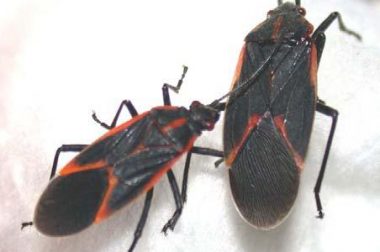 Boxelder bugs, a true bug from the insect family Rhopalidae, are commonly found both outside and inside homes during the fall through early spring. Boxelder bugs are about 3⁄4 of an inch long, and black in color with three red lines on the thorax and red lines on the wing margins. During the summer, they feed on leaves, flowers, and seedpods of boxelders and silver maples, where they do minor damage to the trees. Although completely harmless to humans, these bugs can be nuisance and occasionally their waste can stain. Life cycle: Adult boxelder bugs lay eggs on trees in the spring. Nymphs emerge in 11 to 14 days and begin feeding on trees. Nymphs resemble adults, but are smaller and have more red on their bodies. Nymphs develop into adults during the summer, and lay eggs of a second generation of boxelder bugs that is active in August and September. Boxelder bugs become a nuisance when second generation bugs congregate on the outsides of homes on sunny days in September and October. Boxelder bugs then move indoors to find a protected place to overwinter. They remain in attics and wall voids until the spring when the bugs move back outdoors. Although boxelder bugs do not breed indoors, some may be active on sunny days in the winter. Populations of boxelder bugs are highest after dry spells. Wet weather promotes a fungal disease that is an important for population control.

Control: Because boxelder bugs are not harmful, methods of control are a personal preference.  Removing all boxelder trees in an area will prevent breeding. Caulking windows and doors, and repairing window and door screens will prevent bugs from entering a home. You can also vacuum the bugs up with a hose attachment (to avoid staining fabric), but if vacuuming, dispose of the vacuum contents immediately or bugs can crawl out. If you decide you would like to spray for control, one home remedy is to use a 3-4% mix of water and soap (by volume) that can be sprayed directly on the insects. Remember however that soaps only kill on contact. You can also have a professional apply insecticides to the sides of your home. Some insecticides are ineffective at cool temperatures, but insecticidal soap or sprays containing permethrin, cyfluthrin or esfenvalerate are effective.

*Completed as partial fulfillment of the requirements for a BS in Entomology at the University of Wisconsin-Madison.