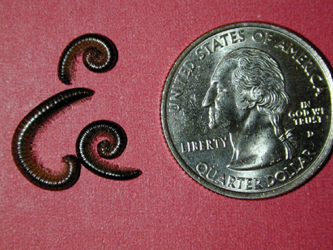 Millipedes can become pests in late summer and fall, as well as during wet periods, when they are found in large numbers in and around the home.  These harmless, hard-shelled, segmented worms feed on decaying organic matter in the soil and can be easily identified because they have two pairs of legs on each body segment.

Millipedes live in the soil and often come out during the night and crawl around.  When the sun comes up they look for moist, sheltered sites.  The largest numbers of millipedes are seen in areas close to large sources of organic matter such as old fields, vacant grassy areas, and wooded areas with accumulations of leaf litter.  At times (fall primarily), thousands of millipedes move from these areas and accumulate around the home each morning.  Millipedes often collect under flower pots and boards, in leaf litter, and in cool, damp, dark areas such as basements, crawl spaces, cement stoops and garage floors.

Control:  If millipedes come indoors, they will die in 2 to 3 days because of a lack of moisture.  They can be vacuumed or swept up.  To prevent millipedes from coming inside, eliminate or caulk gaps around door and window frames.  Also be sure to caulk along the foundation because millipedes often crawl up under siding.  Minimize sites with high moisture (e.g., leaky faucets, air conditioners, broken down spouts) and consider removing organic debris such as bark mulch from the foundation, as organic matter can serve as a millipede breeding site.

If large numbers of millipedes migrate to your home from adjacent land, consider applying insecticides outside as a barrier treatment.  You can apply a 3 to 4 ft. band of a granular insecticide, or a spray applied with compressed air or a hose-end sprayer, along the foundation of a structure.  However, a 5 to 10 ft. band applied at the edge of the lawn next to the site from which the millipedes are migrating may be more effective.  Sevin (carbaryl) can be used, but is less effective at cooler temperatures.  Products containing synthetic pyrethroids such as cyfluthrin, permethrin and cypermethrin work under cool conditions.