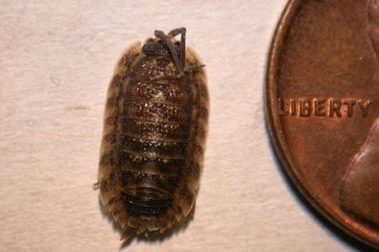 Sowbugs and related pillbugs are harmless soil inhabiting creatures that occasionally are found in high numbers in and around the home.  These hard-shelled, multi-legged, segmented isopods feed on decaying organic matter in the soil.  Sowbugs often collect under flower pots, outdoor rugs, and boards, in leaf litter, and in cool, damp areas such as basements and crawlspaces.  Pillbugs roll up into a ball if disturbed.

Sowbugs live in the soil and often come out at night and crawl around.  When the sun comes up, they look for moist, sheltered sites and often crawl beneath door sweeps, or under siding and fall into the basement.  The biggest numbers outdoors are seen in damp areas with ample organic matter such as mulched flower beds, and wooded areas with accu¬mulations of leaf litter.

Control:  If sowbugs come indoors, they will not survive long because of a lack of moisture.  They can be vacuumed or swept up.  To prevent sowbugs or pillbugs from coming inside, caulk or seal around door and window frames to eliminate gaps, and especially along the foundation where they often crawl up under siding.  Minimize moisture sites (leaky faucets, air conditioners, broken down spouts) and consider removing organic debris such as bark mulch from the foundation as this can serve as a breeding site.

If large numbers of sowbugs and pillbugs migrate indoors, consider applying insecticides outside as a barrier treatment.  Granular insecticides, or sprays applied with compressed air or a hose-end sprayer, can be applied in a three to six foot band along the foundation of the structure.  Sevin (carbaryl) can be used, but this product is less effective at cooler temperatures.  Products containing synthetic pyrethroids such as cyfluthrin, permethrin, bifentrin, and cypermethrin work under cool conditions.