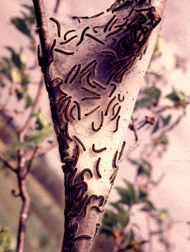 Control:  Eastern tent caterpillars, fall webworms and forest tent caterpillars rarely reach large enough populations in ornamental trees to cause serious damage.  Typically, trees can recover from feeding damage.  However, nest and feeding damage can lower the aesthetic value of a tree.  In addition, repeated defoliation year after year may contribute to tree decline.  On small trees, webworm nests can be removed or pruned out.  Simply scrape or prune the nest off onto the ground and crush to destroy the caterpillars.  Remove nests in the early morning or late afternoon because more caterpillars are located in nests at these times.  In larger trees, insecticide treatments may be necessary.  Treat small, young caterpillars while they are inside the nest in the morning or late afternoon. 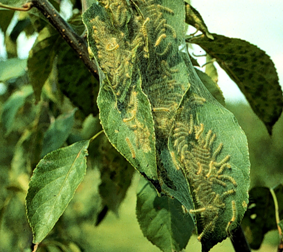