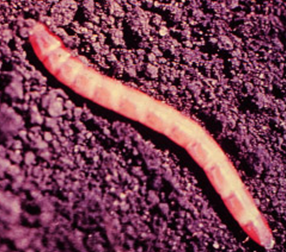 Wireworms are the larvae of several species of click beetles that feed primarily on grasses, including grass crops such as corn and small grains.  Row crops that are attacked include beans, beets, cabbage, carrots, lettuce, onions, peas, potatoes, and radishes.  Asters, phlox, gladioli, and dahlias are some of the more commonly infested herbaceous ornamentals.

Appearance:  Wireworms are thin, shiny, jointed, yellow to reddish-brown, worm-like larvae.  They range in length from 1/4 to 1 1/2 inches and are approximately 1/8 wide.  The different species of wireworms are distinguished by the ornamentation on the last body segment.  Adults are hard-shelled, brown or black “streamlined” beetles that flip into the air with an audible click when turned upside down.

Symptoms and Effects:  Wire-worms feed on seeds, hypocotyls, or developing cotyledons.  This feeding activity results in reduced germination, snakehead seedlings, and wilted or stunted plants.  Dead spots scattered in a planting may be an indication of wireworm activity.  If the seedlings in affected areas are dug, they will be riddled with holes and larvae may be found feeding on the roots of wilted plants.  Wireworms tend to be most damaging one to four years after plowing up sod, or in poorly drained lowlands, but they are not exclusive to these areas.

Life Cycle:  Wireworms have an extended life cycle, taking from one to six years to complete one generation.  They overwinter as either adults or larvae.  Larvae inhabit the upper six inches of soil where they migrate only short distances and feed on seeds and plant roots.  They are sensitive to moisture and may burrow deeply into the soil in dry conditions.  Adults become active in spring and begin laying eggs.  Adult females may live 10 to 12 months, spending most of this time in the soil where they may lay up to 100 eggs in sod, and grassy weedy areas in row crops.  Egg hatch occurs over several days to weeks.  The tiny larvae immediately begin to feed on the roots of grasses, weeds, and other crops.  Because of their extended life cycles, larvae of some wireworm species will feed for two to three years before pupating.  Adult wireworms that emerge from these pupae remain in the pupal chambers until the following spring.

Scouting Suggestions:  Scheduled scouting is not recommended and no thresholds for wireworms have been developed.  If wireworm damage is suspected, dig up several ungerminated seeds or damaged plants along with a four to six inch core of surrounding soil and check for wireworms in and around roots, or in the underground portion of stems.  Larvae may be extracted from soil by washing.  Bait stations may be buried in fall or spring and recovered to check for wireworm larvae.

Control
Non-Chemical:  Crop rotations that avoid susceptible crops and clean cultivation may reduce wireworm numbers.  Some species of wireworms thrive in poorly drained soil and can be reduced by improving drainage.  Clean summer fallowing of infested fields has been effective in some areas.  Certain soil types (e.g., silt loams) are particularly susceptible.

Several natural enemies of wireworms have been described, but they are not effective in reducing populations.

Chemical:  Insecticides registered for wireworm control are rarely recommended since outbreaks are infrequent.  If treatment is necessary, applications should be made at the time of planting and incorporated into the soil prior to planting.  Refer to University of Wisconsin-Extension publication A3422 “Commercial Vegetable Production in Wisconsin” for a list of recommended products.

For more information on wireworms:  See UW-Extension Bulletin A3422, or contact your county Extension agent.