The viburnum leaf beetle (VLB), Pyrrhalta viburni, is an invasive insect that feeds exclusively on and can significantly damage Viburnum species. VLB is native to Europe and was detected in Canada in 1947. The first report of VLB in the United States was in New York State in 1996. VLB is now found scattered across much of the northeastern US. In Wisconsin, an isolated infestation of VLB was discovered in Dane County in 2009, but was successfully eradicated. In 2014, VLB was detected on a mature viburnum bush in northern Milwaukee County and other nearby infestations were detected in June 2015. At present, VLB infestations are known from Kenosha, Milwaukee, Ozaukee, Washington, Waukesha, and Winnebago Counties.

Appearance: Adult VLB’s are approximately ¼ inch long and yellowish-brown in color. VLB larvae can be up to ⅓ inch long and range in color from yellowish-green to light brown with a series of black spots and dashes on their bodies.

Symptoms and Effects: VLB larvae chew holes in viburnum leaves in the spring creating a lace-like (i.e., skeletonized) pattern. VLB larvae feed individually or in small groups and can cause significant damage to viburnum shrubs. This damage can resemble the feeding damage of Japanese beetles (see University of Wisconsin Garden Facts XHT1062 “Japanese Beetle”). In late June and early July, VLB adults begin to feed, chewing oblong holes in leaves. Severe VLB infestations can cause complete defoliation of a viburnum shrub, which weakens the plant over time and can eventually lead to death.

Life Cycle: There is only one generation of VLB per year. VLB’s overwinter as eggs and development from eggs to adults takes approximately eight weeks. Larvae typically appear in early to mid-May and feed for several weeks, passing through three stages (instars) as they grow. In early to mid-June, larvae pupate in the soil and adults emerge by late June or early July. VLB females lay eggs during the summer and into October. They chew small pits in twigs, deposit five to eight eggs into each pit, and then cover the pits with tiny pieces of chewed wood to protect the eggs. Each female can deposit up to 500 eggs. Eggs remain in place through the winter until they hatch the following spring. 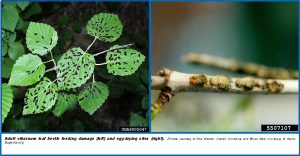 Chemical: Prior to bud break, apply horticultural oil to twigs where VLB eggs have been laid. This will significantly reduce the number of eggs that will hatch. Control any surviving larvae with contact insecticides such as acephate, bifenthrin, carbaryl, cyfluthrin, deltamethrin, lambda-cyhalothrin, and permethrin. Horticultural oil, insecticidal soap, pyrethrins and spinosad can also be effective. To achieve the best results, apply insecticides when larvae are small and before they have caused significant damage. VLB adults can be managed with contact insecticides, if needed, but are mobile and more challenging to control. Systemic products (e.g., clothianidin and imidacloprid) applied as soil drenches can also be effective, but apply these products after flowering (to minimize any risks to pollinators), but before VLB damage occurs to achieve the best protection.