The lily leaf beetle (LLB), Lilioceris lilii, also known as the red or scarlet lily beetle, is an invasive insect of Eurasian origin.  This insect was first reported in North America in eastern Canada during World War II and was most likely introduced in shipments of plant materials from Europe.  LLB spread to New England in the 1990’s and has been moving westward since that time.  LLB made its ﬁrst appearance in Wisconsin in 2014 and as of the end of 2019 has been found in 12 counties including Dane, Door, Langlade, Lincoln, Marathon, Oneida, Pierce, Portage, Price, Shawano, Taylor and Wood Counties. 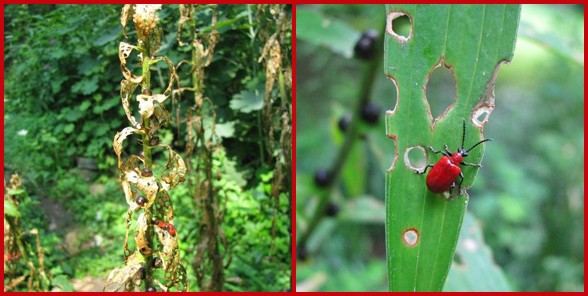 LLB can cause signiﬁcant damage to true lilies (Lilium spp.), including both native and cultivated types, as well as fritllaries (Fritillaria spp.).  LLB can also cause damage, but to a lesser extent, to lily of the valley (Convallaria majalis) and Solomon’s seal (Polygonatum spp.).  LLB does not cause damage to daylilies (Hemerocallis spp.), canna lilies (Canna spp.) or calla lilies (Calla palustris).

Appearance:  LLB adults are bright red and approximately 1/4 inch long, with black legs, head, antennae, and undersides.  When disturbed, LLBs tumble from plants and land upside down on the ground, where they play dead.  Their dark-colored undersides make them hard to spot.  To potentially deter predators, adults squeak if squeezed.

LLB larvae have plump, squishy bodies and are slug-like in appearance.  They tend to be orange or yellowish in color with black heads.  At maturity, larvae can be almost 1/2 inch long.  As a defensive tactic, larvae typically camouﬂage themselves with their own excrement and can resemble slimy greenish-brown slugs or a mobile pile of animal droppings.

LLB eggs are tiny (less than 1/10 inch long) and reddish in color.  Female LLBs lay the eggs (typically in a batch of a dozen or less) on the underside of leaves in a row parallel to a vein.

Symptoms and Effects:  Both LLB adults and larvae chew irregular holes and notches in lily leaves, stems, and developing buds.  Larvae are the more damaging stage of the insect.  When feeding damage is severe, LLBs can completely defoliate plants and destroy flowers.

Life Cycle:  There is a single generation of LLBs each year, but adults can live for several years.  LLBs overwinter as adults in sheltered places, soil, and plant debris in gardens and wooded areas.

These overwintering sites are not necessarily near lilies or other host plants.  Early in the spring, LLB adults emerge to feed, mate and lay eggs.  Because they are strong ﬂiers, LLBs can disperse over long distances to locate host plants.  Eventually, females lay between 250 and 450 eggs.  Eggs hatch within four to eight days.  Emerging larvae feed for two to three weeks during the spring and early summer.  Engorged larvae eventually drop to the soil to pupate (i.e., transform into adults).  Pupae are bright orange and encased in a white cocoon with black spots.  Adults emerge 16 to 22 days later and feed throughout the rest of the growing season and into the fall. 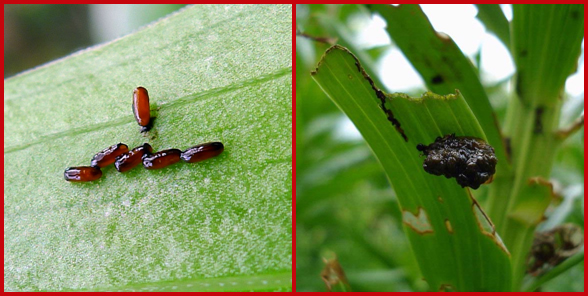 Control:  If you have a small number of lilies, consider hand-picking and crushing adults and larvae or knocking them into a container of soapy water.  Also, crush eggs by hand if you see them.  Repeat this process regularly throughout the growing season.  If LLB becomes a chronic and severe problem, consider replacing your lilies with plants that are not attacked by the insect.