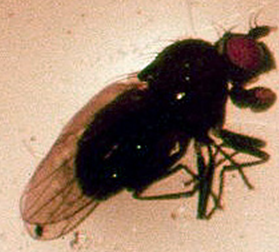 Fungus gnats (Bradysia impatiens and B. coprophila) belong to the insect order Diptera which contains the flies, gnats, mosquitoes, and midges.  These insects only have one pair of wings and undergo a complete metamorphosis.  Fungus gnats are considered a cosmetic problem in most situations, but larval feeding on plant roots may also be associated with root rots.  The adults are weak fliers and are often seen at rest on potting media.

Shore flies (Scatella stagnalis) are another nuisance insect that is often confused with fungus gnats in the greenhouse.  Unlike fungus gnats, they feed on algae and are a problem in greenhouses with standing water on or beneath the benches.

Adult fungus gnats are dark brown or black, delicate flies that are 3∕16 inch long and resemble mosquitoes.  The larvae are slender maggots that reach 1∕4 inch when fully grown.  The larvae are whitish or translucent with a black head capsule.

Shore flies are more robust than the delicate fungus gnats.  They actually resemble fruit flies with their short antennae.  Unlike fungus gnats, shore flies are very strong fliers.  Close inspection of their wings will reveal five light spots on dark wings.  Larvae are opaque and lack the distinct head capsule present on fungus gnat larvae.  Both the larvae and pupae of shore flies have a pair of breathing tubes on their hind end.

Fungus gnat larvae feed on decaying organic matter, fungi, and algae in the soil.  If populations reach high levels, they may damage roots by feeding on root hairs or tunneling into the roots themselves.  Most damage is to seedlings and cuttings that have not produced callus tissue.  However they may also damage larger plants of susceptible species (e.g., begonias, carnations, geraniums, poinsettias).  The wounds produced by the larvae provide an entry site for pathogenic fungi, in particular, root rot fungi.  Adults can reduce the aesthetic appearance of plants by leaving fecal droppings (flyspecks) on plants and pots.

Shore flies are primarily a nuisance in the greenhouse.  The only “damage” they produce is the flyspeck that will tarnish the aesthetic appearance of a crop.

There are several generations of fungus gnats per year.  Adult females lay two to 30 eggs in clusters on the surface of moist media.  The larvae go through four instars over the course of one to two weeks before pupating in the soil.  Pupation lasts about one week, after which the next generation of gnats emerges.

Shore fly eggs are scattered on algae or moist soil.  The eggs hatch in two to three days and the larvae feed for about one week on algae, bacteria, and yeasts just beneath the soil surface before entering the pupal stage.

Monitor fungus gnat adults with a yellow sticky trap placed horizontally at the crop canopy.  Shore flies are more attracted to blue sticky traps.  Use 10 traps per 1000 sq. ft.  To monitor larvae in the soil, place potato disks on the soil surface and recheck in three to four days.  If there are larvae in the container they will come to the surface to feed on the potato and can easily be counted.  Replace the potato disks every two weeks.  Ten potato disks per 10,000 sq. ft. of production area are recommended.

Non-Chemical:  Eliminate breeding areas such as infested growing media and plant debris.  Avoid overwatering plants to reduce the amount of algae growing in containers.  Excess fertilizer will also promote algal growth.  If you consistently have problems with fungus gnats and shore flies, you may want to reconsider your potting media and choose media that have less organic matter.

For information on biological control of fungus gnats and shore flies, refer to NCR publication 581 “Biological Control of Insects and Other Pests of Greenhouse Crops”.

Chemical:  There are several insecticides available for control of fungus gnats and shore flies.  Refer to UW-Extension publication A3744 “Insect Pest Management for Greenhouses” for a complete listing of available products.  There are several insect growth regulators, as well as Bacillus thuringiensis israeliensis, that may be used to control fungus gnats without disrupting any natural enemies that may be present.  These include cyromazine, diflubenzuron, and fenoxycarb.  Apply as a drench to the containers.  Care should be taken to avoid root pruning with some formulations of insecticidal drenches. 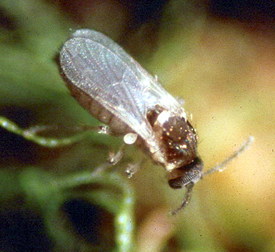 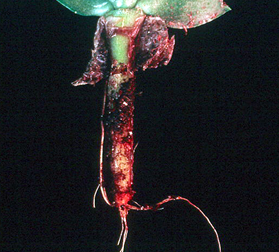 Root damage due to feeding by fungus gnat larvae.