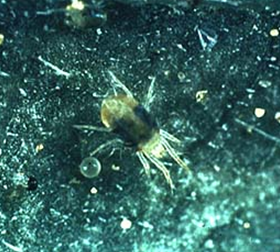 An adult spider mite and egg

There are many reasons why mites are problems in greenhouses.  Mites are relatively small and they spend most of their time on the undersides of leaves, within tender buds, or deep within flowers, which makes them difficult to detect and effectively control.  Mites typically have a rapid life cycle (i.e., populations build rapidly), they have a wide host plant range (they can be found on most plant material), and are usually resistant to pesticides.  All of these factors may contribute to their deserved status as a severe pest of greenhouses.  In general, the biology of mites is similar.  However understanding the biology of individual species is crucial for attaining effective control.

Plants Attacked and Damage:  Most mite species have a wide host range, attacking a variety of greenhouse crops.  They feed on plant materials such as African violets, begonias, chrysanthemums, cyclamens, dahlias, fuchsias, gerberas, geraniums, gloxinias, hibiscuses, ivies, jasmines, impatiens, New Guinea impatiens, lantanas, marigolds, petunias, snapdragons, verbenas, vincas, and zinnias.  Mites feed on plant material by piercing plant tissue with their mouthparts and removing plant fluids.  Some mite species inject a toxin in their saliva as they feed.  Feeding damage varies depending upon the specific mite and plant species being attacked, but often appears on the upper leaf surface as a characteristic mottling or speckling.

Life Cycle and Biology:  High temperatures of 70-80 degrees F and lower humidity favor the development of broad mites.  Female broad mites lay between 30-75 eggs on leaf surfaces over an eight to 13 day period.  Larvae (nymphs) hatch in two to three days and begin feeding.  Broad mites can complete their life cycle (egg to adult) in as little as seven days.

High relative humidity (80-90%) and temperatures of 60 degrees F favor the development of cyclamen mites.  Severe outbreaks of cyclamen and two spotted spider mites typically occur in greenhouses in the fall and winter months.  Adult female cyclamen mites may live for up to one month and can reproduce without mating.  Each female lays two to three eggs per day for up to two to three weeks.  The eggs are laid in moist, dark places in crevices and at the base of the plant.  Most eggs will develop into females.  Nymphs hatch from eggs in three to seven days, and feed for four to seven days.  Larvae then pupate (transform) and  adults emerge in two to seven days.  Thus, the cyclamen mite life cycle varies from one to three weeks depending upon greenhouse temperatures.

Spider mite species such as the two-spotted, carmine, and Lewis mite favor hot and dry conditions.  Each female can produce 100-200 eggs which hatch into larvae in three to five days.  Spider mites remain in the larval stage for a brief period (four to seven days) before transforming into adults.  The typical life cycle (egg to adult) takes seven to 14 days, but varies considerably depending on temperature.  All developmental stages occur on the plant.  Large numbers of mites produce visible webbing, which can completely cover leaves and flowers.

Control:  Spider mites can be controlled on greenhouse crops chemically or biologically.  A number of conventional pesticides (miticides) are labeled for mites.  Conventional pesticides that usually provide good to excellent control include abamectin, bifenazate, and pyridaben.  However, high volume and repeat applications may be necessary to achieve adequate control.  Some mite populations that are resistant to miticides such as abamectin. 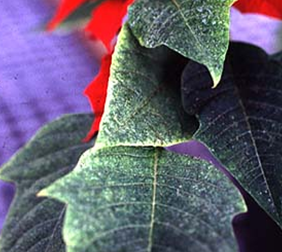 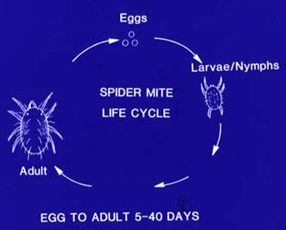