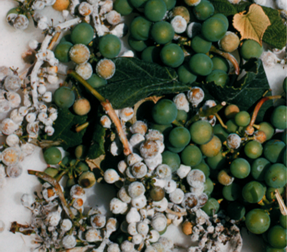 Downy mildew can cause severe losses in regions where grapes are produced.

Jim Olis* and Brian Hudelson, UW-Madison Plant Pathology *Completed as partial fulfillment of the requirements for a BS in Plant Pathology at the University of Wisconsin Madison.
Revised:  8/6/2012
Item number:  XHT1077

What does downy mildew look like? Downy mildew symptoms begin as small, green or yellow, translucent spots that can eventually spread to an entire leaf, stem, flower or fruit.  Infected plant parts may eventually brown or bronze. The causal fungus appears on infected stems, flowers and fruits, and on undersurfaces of infected leaves, as a downy, gray-white fuzz. Microscopic examination of this fuzz is necessary to confirm a downy mildew diagnosis.

How do I save a plant with downy mildew? Downy mildews can be controlled using fungicides.  Those containing chlorothalonil, copper sulfate and lime (e.g., Bordeaux mix), fosetyl-Al, mancozeb, metalaxyl, mefenoxam, or trifloxystrobin are labeled for downy mildew control. Be sure to read and follow all label instructions of the fungicide that you select to insure that you use the fungicide in the safest and most effective manner possible.

How do I avoid problems with downy mildew in the future? Consider buying downy mildew resistant varieties, when available. In new plantings, space plants far apart. In established plantings, prune or thin plants to increase airflow.  This will reduce humidity and promote rapid drying of foliage. Avoid overhead watering and apply water directly to the soil at the base of your plants. At the end of the growing season, remove and destroy infected plant debris as this can serve as a source of spores for the next growing season.

For more information on downy mildew: See UW-Extension Bulletin A2129, or contact your county Extension agent.