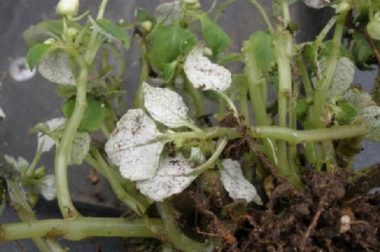 What does impatiens downy mildew look like?  Symptoms of impatiens downy mildew often first occur on leaves near the tips of branches.  Initial symptoms include an irregular yellow-green discoloration of leaves that can be confused with spider mite feeding injury.  Affected leaves often curl downwards.  Stunting and reduced flowering are other common symptoms.  As the disease progresses, leaves and flowers drop off, leaving a bare stem.  Eventual death of affected plants can occur.  The most distinctive characteristic of impatiens downy mildew is the presence of a fuzzy white material (actually the organism that causes the disease) that develops on stems, buds and particularly the under sides of leaves.

Where does impatiens downy mildew come from?  Impatiens downy mildew is caused by the fungus-like water mold Plasmopara obducens.  This organism is commonly first introduced into a garden on infected impatiens transplants.  It can also be introduced by windborne spore-like structures called sporangia.  Once established in a garden, P. obducens can spread from plant to plant by wind or rain splash.  Cool, wet/humid weather favors disease development.  P. obducens can potentially overwinter in a garden in the form of specialized spores called oospores.  These spores can be found in soil and in infested plant debris.  Whether P. obducens can be introduced via impatiens seed is unclear.

DO NOT compost these plants.  Also consider removing all impatiens within a three foot radius of symptomatic plants.  These plants are likely infected, but not yet showing downy mildew symptoms.  DO NOT use fungicides on plants that are showing symptoms as such treatments will not be effective.

How can I avoid problems with impatiens downy mildew in the future?  Use a wide variety of bedding plants in your garden.  A diverse plant selection can limit the spread of disease-causing organisms (like P. obducens) and limit the impact of diseases when they occur.  Plants such as alternanthera, begonia, coleus, iresine and torenia are possible alternatives to impatiens.  If you decide to plant impatiens in your garden, consider using New Guinea impatiens or its hybrids.  These types of impatiens appear to be resistant to or tolerant of impatiens downy mildew.  Inspect impatiens plants carefully for symptoms of downy mildew before buying them.  DO NOT buy infected plants.  Once you have purchased your impatiens, DO NOT plant them right away.  Keep them in a holding area and watch them for symptom development.  Obvious symptoms of impatiens downy mildew may not appear for five to 14 days.  In your holding area, keep plants from different sources (e.g., different greenhouses) as far apart as possible.  That way, if impatiens plants from one source are infected, you can limit spread to other plants.

When planting your beds, DO NOT use impatiens in the same areas as you did last year; remember that P. obducens can potentially overwinter as oospores in soil and old impatiens debris.  Space impatiens plants as far apart as possible.  This will promote good air flow and promote drier conditions that are less favorable for downy mildew to develop.  For the same reason, avoid overhead watering (e.g., watering with a sprinkler).  Instead, use a soaker or drip hose to apply water gently to the soil without splashing it onto leaves.

As a last resort, consider applying fungicide treatments for control.  Use a fungicide that contains the active ingredient mancozeb and that is labeled for use on impatiens.  Such products are typically available for homeowner purchase at local garden supply centers.  Start applications before symptoms are present and be sure to read and follow all label instructions of the fungicide that you select to ensure that you use the product in the safest and most effective manner possible.  Apply the fungicide per label directions as long as weather conditions (i.e., wet or humid weather) are favorable for disease development.