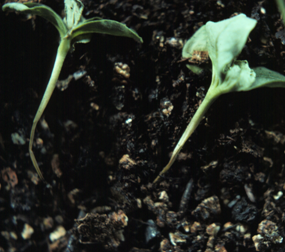 Lower stem collapse of Zinnia seedlings due to damping-off.

What is damping-off?  Damping-off is a common and fatal disease that affects all types of plant seedlings.  The disease is most prevalent when seeds are germinated in cool, wet soils.  Fortunately, seedlings are susceptible to damping-off for only a short period following emergence and eventually outgrow their susceptibility to the disease as they age.

What does damping-off look like?  Seedlings killed by damping-off initially are healthy, but shortly after emergence, become infected at or just below the soil line.  The lower stems of the seedlings collapse and the seedlings fall over onto the soil surface.  The seedlings subsequently die.

Where does damping-off come from?  Damping-off is caused by several soil-borne fungi, most commonly including Pythium spp., Rhizoctonia solani and Fusarium spp.  These fungi readily survive and are moved around in soil or on soil-contaminated items (e.g., pots, workbenches).

How do I avoid problems with damping-off in the future?  When planting seeds, make sure that work areas, tools and pots are pathogen-free.  Spray disinfectants that are at least 70% alcohol can be used to disinfest tools and workbenches.  To disinfest previously used pots, wash them with soapy water, then soak them for at least 20 minutes in 10% bleach, then rinse them thoroughly to remove bleach residues.  DO NOT reuse plastic pots if you have had problems with damping-off (or root rots) in the past, as they are difficult to disinfest.  Be sure to use a well-drained, pasteurized potting mixture when planting.  DO NOT use garden soils as they often contain damping-off pathogens.  DO NOT plant seeds too deeply and germinate seeds at high temperatures, so that seedlings rapidly grow out of their susceptible phase.  DO NOT overwater as damping-off fungi such as Pythium reproduce and infect more effectively in wet soils.  Finally, if the techniques above do not work, then use of fungicide-treated seed, particularly those treated with captan, can dramatically reduce problems with damping-off.

For more information on damping-off:  Contact your county Extension agent.