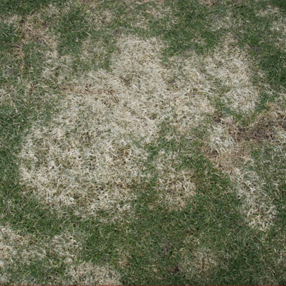 What does Typhula blight look like?  Typhula blight initially appears as roughly circular patches of bleached or straw-colored turf that can be up to two to three feet in diameter.  When the disease is severe, patches can merge to form larger, irregularly-shaped bleached areas.  Affected turf is often matted and can have a water-soaked appearance.  At the edges of patches, masses of grayish-white fungal threads (called a mycelium) may form.  In addition, tiny (1/64 to 3/16 inch diameter) reddish-brown or black fungal survival structures (called sclerotia) may be present.  Typhula blight looks very similar to Microdochium patch/pink snow mold (see University of Wisconsin Garden Facts XHT1145, Microdochium Patch), but the Microdochium patch fungus does not produce sclerotia.

Where does Typhula blight come from?  Typhula blight is caused by two closely related fungi Typhula incarnata and Typhula ishikariensis.  In general, T. incarnata is more common in the southern half of Wisconsin while T. ishikariensis is more common in the northern half of the state.  To distinguish between the two Typhula species, look for sclerotia.  Sclerotia of T. incarnata are reddish-brown and 1/16 to 3/16 inches in diameter.  Sclerotia of T. ishikariensis are black and 1/64 to 1/16 inches in diameter, resembling flakes of pepper.  Typhula blight develops when there is a prolonged period (more than 60 days) when snow covers unfrozen ground and soil temperatures are just above freezing (30 to 40˚F).  Typhula blight typically does not develop if the ground freezes before the first snowfall in the fall/winter, or if snow melts during the middle of winter exposing the ground to colder temperatures.  Damage from Typhula blight is usually not noticed until snow melts in spring.  Applying high nitrogen fertilizers in the fall can increase the risk of Typhula blight developing over the winter. 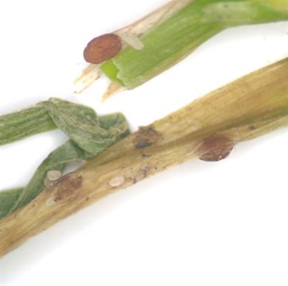 Sclerotia (survival structures) of Typhula incarnata are small and red or rust-colored.

How do I save a turf with Typhula blight?  Turf with Typhula blight may or may not recover depending on the fungus involved.  Both T. incarnata and T. ishikariensis can infect and kill turf leaves, but only T. ishikariensis kills the plant crown.  Turf infected with T. incarnata typically recovers quickly once normal turf growth resumes in the spring.  Turf infected by T. ishikariensis often suffers from crown injury and death making it less likely to recover and more likely to require replanting in spring.  Lightly raking infected turf and reseeding in spring can help speed turf recovery.

How do I avoid problems with Typhula blight in the future?  Consider planting less-susceptible turfgrass species (e.g., fine fescues) to limit the impact of Typhula blight.  Also, avoid using fast-release fertilizers in late fall that can predispose turf to Typhula infections.  Finally, continue to mow turf until it goes dormant as this will help prevent excessive turf top growth that is more easily infected by Typhula.

Because turf often recovers naturally from Typhula blight, fungicide treatments are typically NOT warranted for home lawns.  However, fungicide treatments may be needed to prevent severe damage when a lawn has a history of the disease and when predictions for the upcoming winter suggest that snow cover will persist on unfrozen ground for longer then three months.  Many effective fungicides are available for snow mold control in home lawns and include the active ingredients azoxystrobin, propiconazole, pyraclostrobin, and tebuconazole.  For the most up-to-date fungicide recommendations for Typhula blight, please visit the Turf Pest Management Mobile website (https://turfpests.wisc.edu/).  Fungicide applications should be made in October or November to prevent disease in the spring.  If you decide to use fungicides for control, read and follow all label instructions to ensure that you use the product that you select in the safest and most effective manner possible.