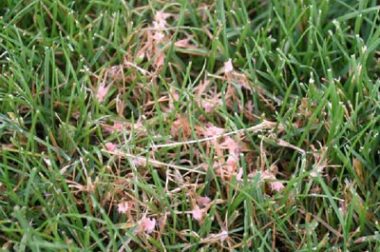 What is red thread?  Red thread is a foliar disease of cool-season turfgrasses.  Grass species affected by this disease include fine fescues (the species most commonly affected), tall fescue, perennial ryegrass and Kentucky bluegrass.  These grasses are commonly used for home lawns, golf course roughs, parks and athletic fields in the Midwest.  Although red thread is not lethal, it can cause unsightly bleaching of large areas of a lawn.

What does red thread look like?  Red thread is often misdiagnosed as pink patch, another turf disease that develops under similar environmental conditions.  Both diseases cause tan, pink, or red circular patches ranging in size from a few inches to two feet in diameter.  In addition, both diseases are noted for the formation of pink to red, spiderweb-like threads along the edges of diseased areas when leaves are wet.  Leaf blades affected by both diseases die starting at the tip, becoming a tan, light-gray or bleached-white color.  Red thread can be distinguished from pink patch by the presence of thick, red tendrils that protrude from affected leaf blades.  These tendrils are the “red threads” that give the disease its name.

Where does red thread come from?  The fungus, Laetisaria fuciformis, causes red thread.   The fungus grows from the red, thread-like structures (called sclerotia) that survive the winter in infected grass blades, thatch and soil.  Sclerotia and infested leaf blades can be moved by water, wind and mowing equipment to other locations where they can cause new infections.  Red thread most often develops in wet, cool (59 to 77°F) weather in the spring and fall.  The disease is most severe on fine fescues (although other turfgrass species also can be affected) that are growing slowly due to cool weather or inadequate fertilization.

How do I avoid problems with red thread in the future?  When seeding or sodding a lawn, choose grasses, that are less susceptible to red thread (e.g., Kentucky bluegrass and hard fescue).  If you use susceptible grass species (e.g., fine fescues and perennial ryegrass), be sure fertilize your lawn optimally in the fall and spring to maintain its growth and vigor.  See University of Wisconsin-Extension Bulletin A3435 “Lawn Maintenance” (available at http://learningstore.extension.wisc.edu) for recommendations on routine lawn fertilization.  On lawns with a history of red thread, apply nitrogen fertilizer in mid to late spring to reduce disease severity and promote healthy turf.  Under dry conditions, water your lawn between midnight to 6 am when dew naturally forms, thus reducing the length of time that your lawn remains wet.  Red thread often develops when turfgrass is watered frequently, so DO NOT water your lawn unless you observe wilting.

Fungicide use is not generally recommended for control of red thread due to the cosmetic nature of the disease, the fact that infected turfgrass typically quickly recovers from the disease and the cost of chemical control.  However, if you feel that fungicide treatments are needed, products containing strobilurins (e.g., azoxystorbin, trifloxystrobin and fluoxastrobin), as well as flutolanil are currently labeled in Wisconsin for managing red thread and can be very effective when applied before symptoms appear.  When using fungicides, DO NOT apply the same active ingredient for all treatments.  Instead, alternate the use of at least two ingredients with different modes of action (i.e., DO NOT only use strobilurins) to help minimize problems with fungicide-resistant strains of the red thread fungus.  Be sure to read and follow all label instructions of the fungicides that you select to ensure that you use the fungicides in the safest and most effective manner possible. 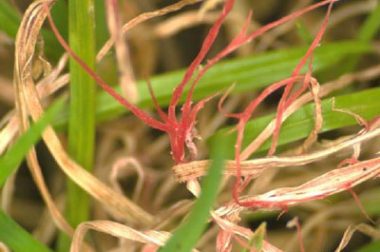