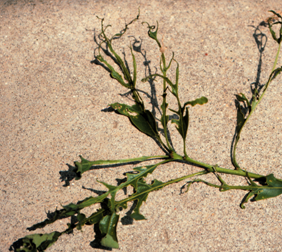 Leaves with tatters appear shredded, or as if damaged by leaf-feeding insects.

Trees with tatters have leaves that are lacy and shredded.  Some leaves may appear as though the tissue between veins has been neatly ripped out, while other leaves have an irregular pattern of damage.  The amount of damage may vary from leaf to leaf and branch to branch.  Adjacent oak trees may show different amounts of damage due to genetic variability, variation in environmental conditions, or other external factors.  Tatters is commonly confused with anthracnose (see University of Wisconsin Garden Facts XHT1001a/b/c), or damage by leaf-feeding insects.

Where does tatters come from?

The cause of tatters has not been precisely determined.  Tatters is thought to be a physiological disorder caused by damage to leaf tissue in the bud-stage, or during the opening of buds in the spring.  Suggested causes of tatters include cold or herbicide injury or, much more rarely, injury due to insect feeding or egg-laying.

How do I save a tree with tatters?

DO NOT PANIC.  Trees affected with tatters often produce replacement leaves within two to three weeks after tattered leaves appear.  However, producing new leaves weakens trees and may make them more susceptible to other diseases and drought stress.  If your trees suffer from tatters, be sure to water them, if possible, during dry periods.  To prevent competition for water and nutrients, remove lawn grass within the drip line of the tree and replace it with a high quality mulch.

How do I avoid problems with tatters in the future?

There is no known method for preventing tatters.  However, the occurrence of tatters one year does not guarantee that the same trees will suffer from tatters in subsequent years.