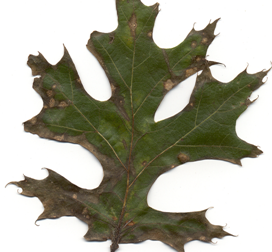 What is Tubakia (Actinopelte) leaf spot?  Tubakia leaf spot, formerly known as Actinopelte leaf spot, is a common late-season leaf disease of oaks.  All species of oak appear to be susceptible to the disease, but oaks in the red oak group (such as black, red and pin oak) appear to be most susceptible.

What does Tubakia (Actinopelte) leaf spot look like?  People often confuse symptoms of Tubakia leaf spot with those of oak anthracnose (see University of Wisconsin Garden Facts XHT1001).  However anthracnose tends to develop earlier, in the cooler part of the growing season (May and June), while Tubakia leaf spot tends to develop later, during the warmer summer months (July and August).  Initial symptoms of Tubakia leaf spot include small to large dark brown or reddish-brown spots on leaves.  Spotting can occur on leaf veins, and death of the veins leads to collapse of leaf tissue beyond the point of infection.  Small twig cankers may also form.  When the disease is severe, Tubakia leaf spot can cause early defoliation of oaks.  However disease usually develops late enough in the growing season that no long-term adverse effects on tree health occur.

Where does Tubakia (Actinopelte) leaf spot come from?  Tubakia leaf spot is caused by the fungus Tubakia dryina (formerly Actinopelte dryina), a fungus that is most likely a fungus “complex” (i.e., a group of several distinct, but closely related fungi).  Tubakia overwinters in infected twigs, and in dead leaves that hang from the tree or are scattered on the ground.  Spores of the fungus are easily spread by wind and rain splash.

How do I save a tree with Tubakia (Actinopelte) leaf spot?  DO NOT panic!  In most cases Tubakia leaf spot is a cosmetic disease.  The disease will make a tree look a little ragged, but will not kill the tree.  DO NOT attempt to use fungicide sprays to control this disease.

How do I avoid problems with Tubakia (Actinopelte) leaf spot in the future?  You can reduce the number of spores that cause Tubakia leaf spot by removing and disposing of fallen, infected leaves.  Leaves can be buried, burned (where allowed) or composted.  When composting, make sure that your compost pile reaches high temperature (approximately 140°F).  Also, make sure that your compost pile is routinely turned so that leaves on the outside of the pile eventually end up in the center of the pile.  The combination of high temperature and decay of leaf tissue in a compost pile helps eliminate the Tubakia leaf spot fungus.  Also, maintain good tree vigor by watering and fertilizing trees appropriately.  Check with your local county Extension agent for details on how to properly care for trees.