San José scale (Diaspidiotus perniciosus) is a fruit tree pest that can be found in most fruit growing regions of the United States. Native to China, this insect was introduced into the United States in the late 1800s. In well-managed orchards, populations of San José scale are generally too low to cause economic damage. In poorly managed orchards however, populations can become high enough in one to two growing seasons to cause tree and fruit injury. Once established, San José scale can be difficult and expensive to control. San José scale is of historical interest because, in the early 1900’s, it was the first insect observed to develop resistance to an insecticide.

Appearance: San José scale females are yellow, wingless and legless, have a soft, globular shape and are approximately 1/12 inch long. Male scales are 1/25 inch long, are yellowish-tan with a dark band across the back and have wings and long antennae. Immature San José scales (called nymphs) go through three stages (crawler, white cap, and black cap). Crawlers are roughly the diameter of the tip of a pin, are yellow, and have six legs and antennae. Crawlers develop into the white cap stage as they become immobile and secrete hard, white, waxy coverings. The black cap stage follows as the waxy coverings turn gray-black. 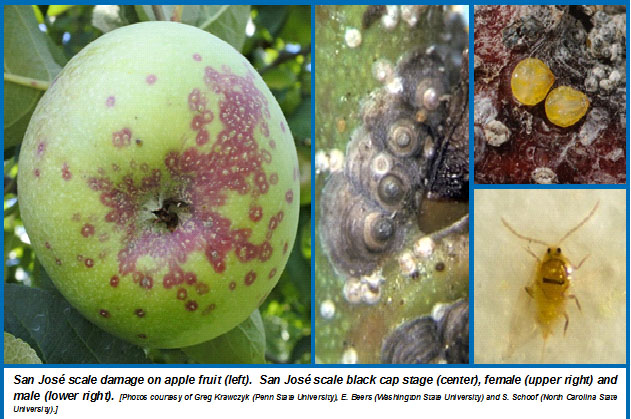 Life Cycle: San José scale can complete its life cycle in approximately 37 days. There are typically two generations of the insect each year, and generations overlap so that all stages of the insect occur at the same time during the summer. San José scale overwinters in the black cap stage. Development of the insect resumes in spring when temperatures exceed 51°F. Around petal fall, mature females and short-lived males emerge. Males can fly from tree to tree, but females move very little. After mating, females produce approximately 400 live crawlers over a period of six-weeks. The first generation of crawlers appears between early and mid-June, with white and black cap stages developing over approximately the next month. A second generation of adults appears between July and early September. If warmer temperatures continue into the fall, a third generation of San José scale can occur between late October and early November.

Monitoring: The first indication of a San José scale problem may be when infested fruit is found at harvest or (in commercial settings) at packing. However, sometimes the insect can be found earlier on branches. If a San José scale infestation is detected, careful examination of trees/orchards during dormancy can help determine the level of infestation and the extent of spread. Watch for trees that retain leaves during winter (a good indication of a San José scale infestation) and check both branches and trunks for the insect. Mark (e.g., with flagging tape) infested areas on trees to identify where sprays should be applied the following growing season. 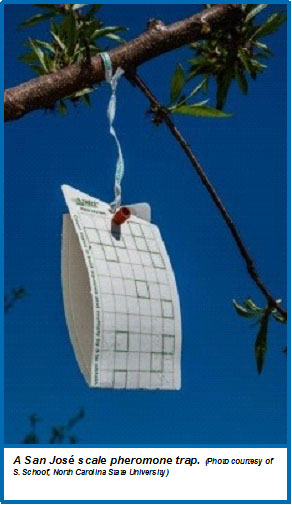 In the spring and summer, use pheromone traps to detect the presence of males. Begin using traps at the pink stage of apple flower bud development, in areas where infestations have been detected. Place traps on the northern or eastern side of trees at a height of six to seven feet. Check traps at least weekly. Traps are effective for four to six weeks.

Monitor for crawlers by wrapping two-sided sticky electrical tape (coated with a thin layer of petroleum jelly) around infested tree limbs at both ends of the infested area. Start checking tape for crawlers approximately four to six weeks after bloom.

Control: The best strategy for managing San José scale is to prevent serious infestations. The best cultural control is to prune out infested branches. This reduces scale numbers and opens up the tree canopy so that if spray treatments are used, there is better penetration. Several parasites and predators attack San José scale; however, use of these alone does not provide enough control to prevent damage.

The most effective spray control for San José scale is the use of 2% horticultural oil with or without an insecticide just before or right after bud break, but before flowers open. During this period San José scale resumes its development after being dormant during the winter and the sprays will smother the insects. After applying horticultural oil, continue to monitor for adults and crawlers (as described above) and if you still find active San José scale, consider using chemical insecticides for additional control. Insecticides containing insect growth regulators (e.g., pyriproxyfen or buprofezin), neonicotinoids, organophosphates, or spirotetramat can be effective. Start applications when you find the first adults in pheromone traps or the first crawlers on sticky tapes (usually around early to mid-June). Apply another spray approximately 10 days later if you continue to find active crawlers. When using two applications, be sure to use two products with active ingredients in different Insecticide Resistance Action Committee (IRAC) chemical classes (i.e., with different modes of action) to delay development of insecticide resistance. See http://www.irac-online.org/modes-of-action/ for guidance. Note that late-fall and postharvest applications are NOT effective for San José scale control. Also, remember that whenever you use insecticides, you should consider the effects of products on non-target and beneficial insects.