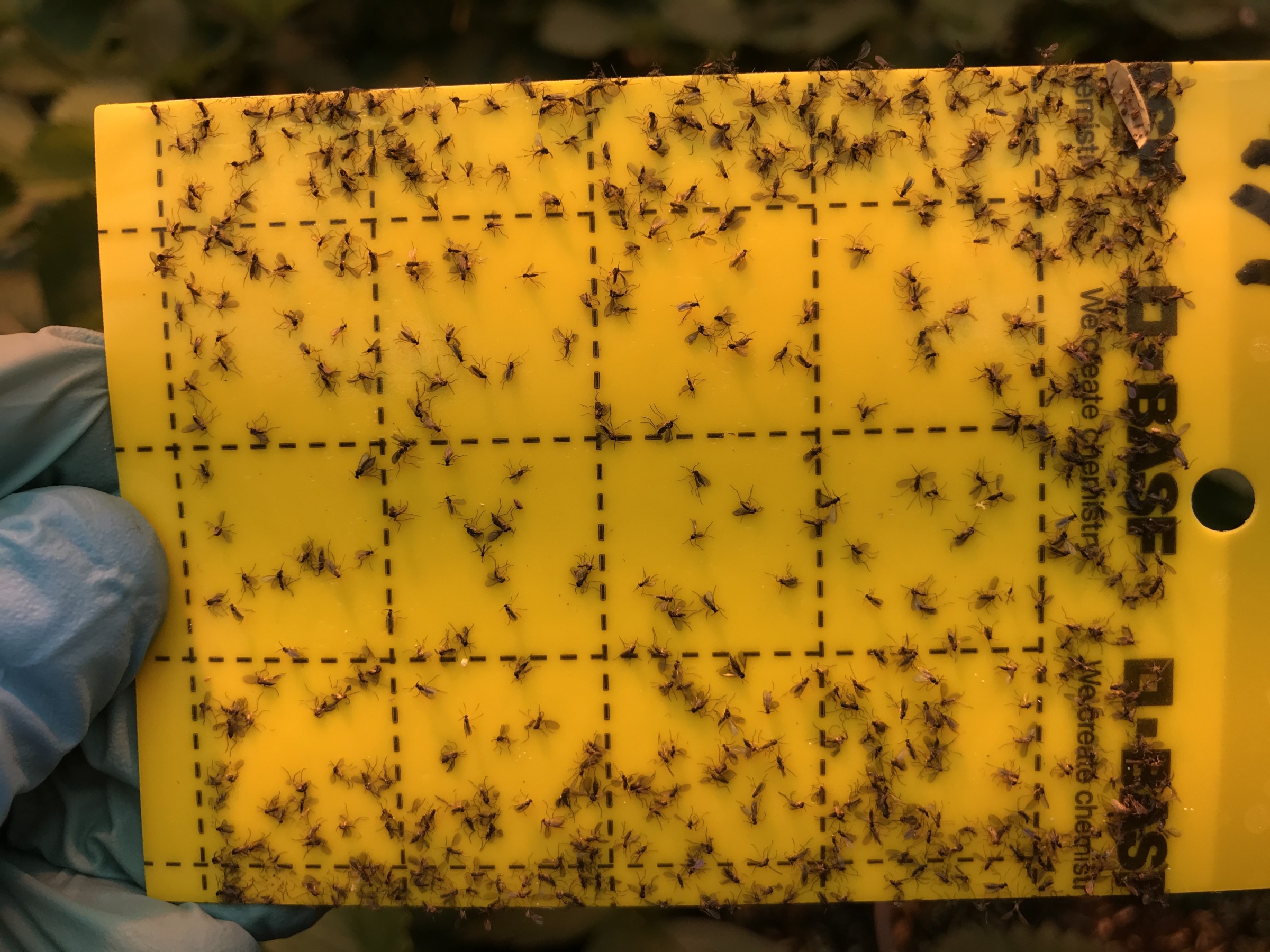 Appearance: Adult fungus gnats are delicate, dark brown or black flies that are approximately 1/8 inch long. They have dark, translucent wings that fold on their backs when they are at rest. Adult fungus gnats can be distinguished from other small flies by the vein patterns of their wings. When viewed with a magnifying glass, fungus gnat wings have a distinct rounded Y-shaped set of veins near the wing tips. Fungus gnat larvae (maggots) resemble pale worms and have a black head. They are ¼ inch in length when mature. Fungus gnats are often mistakenly identified as fruit flies (see University of Wisconsin Garden Facts XHT1102, Fruit Flies in the Home), but these are two distinct insects.

Symptoms and Effects: Fungus gnats are usually noticed indoors when adults fly around light sources (e.g., windows, lamps), or when they fly around or walk across and rest on the soil of potted plants. Adult fungus gnats do not feed on or damage plants but are a cosmetic nuisance. Fungus gnat larvae typically feed on decaying organic matter and fungi in the soil. However, if larval numbers are high, they may damage roots by feeding on root hairs or tunneling into the roots themselves. This sort of damage is rare in home settings.

Life Cycle: Fungus gnats can go through multiple generations per year. Indoors, fungus gnats tend to have overlapping generations where eggs, larva, pupae and adults are all present at the same time. Fungus gnat females lay up to 200 eggs (in clusters) in cracks and crevices on the surface of the moist soil of potted plants. The eggs typically hatch within three to six days. Larvae go through four stages (called instars) over the course of one to two weeks before they pupate near the surface of the soil. Approximately four to five days after pupae form, adult fungus gnats emerge. Adults are short-lived, surviving approximately one week. Under optimal conditions, fungus gnats can develop from egg to adult in three to four weeks.

Scouting Suggestions: Monitor for fungus gnat adults using yellow sticky traps placed near a plant’s leaves. You can buy these traps at your local hardware or garden store. Sticky traps are inexpensive and often include small stakes making them easy to use with potted plants. Sticky traps not only help capture adult fungus gnats (and other insect pests as well), but they can help you keep track of the number of fungus gnats (and other insects) over time. Vinegar traps and other methods commonly used to monitor for fruit flies do not work for monitoring for fungus gnats.

To monitor for fungus gnat larvae, place potato slices on the soil surface of potted plants. If there are fungus gnat larvae in the soil, they will come to the surface to feed on the potato tissue. Check the slices for maggots after three to four days.

Control, Non-Chemical: As noted above, using sticky traps can help control fungal gnats. However, altering environmental conditions of houseplants is the single most important step in managing this insect. Keep the soil surface dry to eliminate favorable egg-laying sites for the insect. You can do this by allowing the top inch of the soil to dry out before you water. Alternatively, you can water from the bottom to provide moisture for the roots while keeping the soil surface dry. In addition, you can cover the soil with a ½ to one inch layer of coarse sand or fine gravel, which will help keep the surface drier and make the soil less attractive for egg-laying.

Fungus gnats are often more of a problem in the fall when houseplants that have been outdoors for the summer, and have become infested, are brought back indoors. It may take three to four weeks of modified watering and use of sand/gravel to get fungus gnats in check.

Control, Biological: Products containing Bacillus thuringiensis subsp. israelensis (Bti) are available to homeowners (e.g., Gnatrol, Mosquito Bits, etc.) and can be used to control fungus gnat larvae in soil. These treatments do not affect eggs, pupae or adult fungus gnats. Apply these products with adequate water to help the Bti filter through the soil to reach the larvae. Use several applications spaced five to seven days apart to control newly hatched larvae until the infestation is under control.

Control, Chemical: Unless a fungus gnat infestation is severe, chemical controls are not warranted. If adult numbers are excessive however, insecticides containing pyrethrins or synthetic pyrethroids can provide temporary control. If you decide to use insecticides, select a product that is labeled for indoor use on houseplants, and read and follow all product label instructions. Apply insecticides to plants and to the surface of potting soil where adults typically rest. DO NOT spray the air with these products as such treatments are ineffective. Even in those situations where insecticide use may be warranted, keep in mind that chemical treatments should not be your sole management approach. Insecticides should always be used in combination with other non-chemical practices (see above).