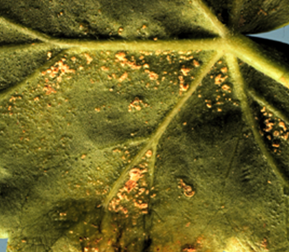 Edema pustules on the underside of a geranium leaf

What is edema?  Edema (or oedema) is a physiological disorder that frequently occurs in houseplants, greenhouse plants, and other plants sheltered under plastic.  This disorder also affects field-grown vegetable crops under certain environmental conditions.  Edema is often a cosmetic problem, but in extreme cases, edema can ruin a greenhouse crop and cause severe economic losses.

What does edema look like?  Small translucent, fluid-filled blisters form on the undersides of mostly older leaves, often beginning at the leaf margins.  Blisters can also occur on stems and occasionally on flowers.  When observed against the light, edema lesions are lighter in color than the surrounding leaf tissue.  The blisters may increase in size or merge, burst, and then scar, turning tan in color and corky in texture.  Some or all leaves may eventually shrivel or roll, and fall off.  Extensive blistering and scarring may limit the plant’s ability to photosynthesize.

Where does edema come from?  When the soil is warm and moist, water absorbed by a plant’s roots may exceed the water lost through a plant’s leaves.  Conditions preventing effective water loss include high relative humidity, low light intensity, cool air temperatures and poor ventilation.  Periods of cloudy weather, or an increase in relative humidity resulting from cooling air temperatures, can make plants susceptible to edema.  Edema has also been associated with the use of oil sprays that interfere with normal water loss.

How do I save a plant with edema?  Edema is typically not fatal, but will make plants less attractive.  To limit problems with edema, water less frequently in cloudy periods or under low light intensity.  Water in the morning so that the soil in which plants are potted will drain by nightfall when cooling temperatures can lead to increased relative humidity.

How do I avoid problems with edema in the future?  Use a growth medium that drains well.  Reduce relative humidity near the leaf surface by increasing plant spacing and air circulation.  Increase light and air temperatures to help increase normal water loss.  Water less frequently during cool, humid weather.  Empty standing water in saucers under pots 30 minutes after watering.