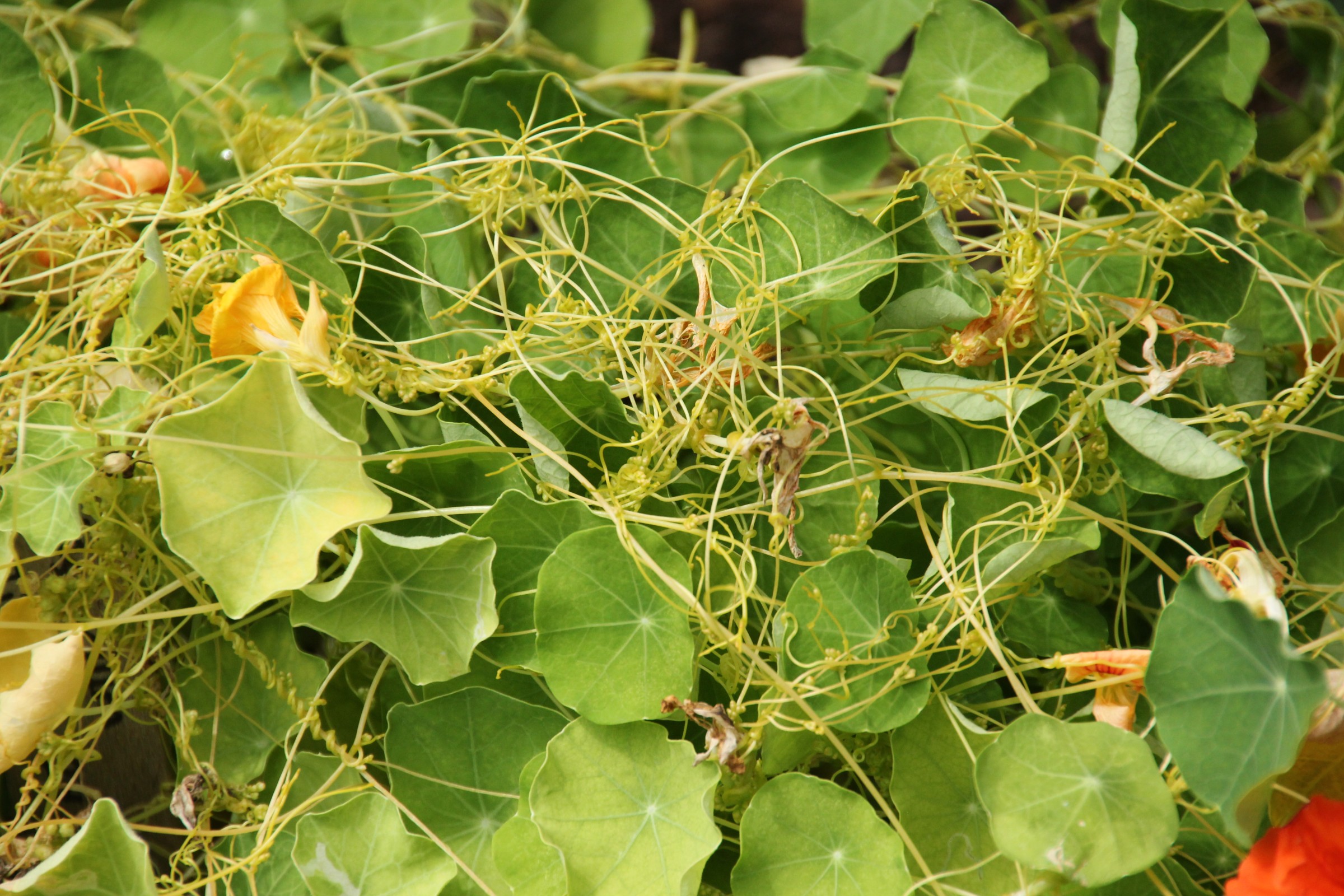 What is dodder?  Dodder is the name of several species of parasitic plants that are widely distributed in North America and Europe.  Plants parasitized by dodder include alfalfa, carrots, onions, potatoes, cranberries, a variety of herbaceous and woody ornamentals, and many weed species.  Parasitized plants become weakened, have reduced yields (in the case of agronomic crops), and can potentially die.

What does dodder look like?  Dodders lack roots and leaves, and also lack chlorophyll, the green pigment found in most plants.  Dodders have slender, yellow-orange stems that cover infected plants in a spreading, tangled, spaghetti-like mass.  From May through July, dodders produce white, pink, or yellowish flowers.

Where does dodder come from?  Dodders produce large numbers of seeds that germinate in the spring to produce shoots that attach to suitable host plants.  Dodders penetrate host tissue, and absorb nutrients via specialized structures called haustoria.  Once established on a host, the bottom of a dodder plant dies (thereby severing its connection with the soil), and the dodder plant becomes dependent on the host plant for water and nutrients.

How do I save plants parasitized by dodder?  On woody ornamentals, simply prune out dodder-parasitized branches.  When small patches of dodder occur among herbaceous plants, apply contact herbicides such as 2,4-D early in the season, preferably before dodder seedlings have parasitized host plants.  Keep in mind that use of contact herbicides will likely also kill host plants.  Alternatively, cut or burn dodder and parasitized plants to keep dodder from spreading, and to prevent seed production.  For widespread dodder infestations, a combination of frequent tilling, burning and herbicide applications may be needed to achieve control.  Be sure to read and follow all label instructions of the herbicide that you select to ensure that you use the product in the safest and most effective manner possible.

How do I avoid problems with dodder in the future?  Dodder’s wide host range and ability to survive as dormant seeds in soil make eradication difficult.  Preventing introduction of dodder is the best method of control.  Use dodder-free seed, and be sure to clean equipment after working in a dodder-infested area.  Try to restrict animal movement between infested and non-infested areas as well.  Depending upon the specific crop or location, use of pre-emergent herbicides containing DCPA, dichlobenil, propyzamide, or trifluralin may be possible to prevent germination of dodder seeds.  Destroy actively growing dodder and any parasitized plants before the dodder produces seeds.  In agricultural settings where dodder has been a problem, rotate away from susceptible crops and grow non-host crops (e.g., corn, soybeans, or small grain cereals).  In conjunction with rotation, adequate control of weed hosts is critical to achieve control.

For more information on dodder:  Contact your county Extension agent.