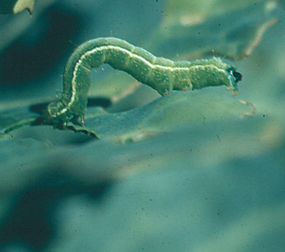 The cabbage looper (Trichoplusia ni) is a lepidopteran insect and an important pest of cole crops in Wisconsin.  All cole crops, including cabbage, broccoli, Brussels sprouts, cauliflower, and rutabaga, are susceptible to attack by this insect.  In addition, cabbage loopers will also attack beets, celery, lettuce, peas, potatoes, spinach and tomato.

Appearance:
The cabbage looper is named for the way in which the caterpillar stage of the insect arches its body while moving.  When fully grown, the caterpillar has a greenish body that is 11∕2 inches long and tapers near the head.  There is a thin white line along each side of the caterpillar and two white lines along its back.  The cabbage looper adult is greyish-brown, night-flying moth with a wingspan of 11∕2 inches.  The mottled brown forewings are marked near the middle with a small, silver-white figure “8: or letter “Y”.

Symptoms and Effects:
Cabbage looper larvae feed on cole crop leaves between the large veins and midribs.  Feeding occurs primarily on the upper leaf surface near the midrib producing large, irregular holes.  Severe feeding damage will stunt cabbage and cauliflower heads.  Larval damage to the developing buds on young cabbages can cause heads to abort.  Cabbage loopers can also bore into the heads of early cabbage and can result in heads that are unmarketable.  Cabbage looper damage to root crops is generally of little economic importance.  The copious quantity of greenish-brown frass (i.e., fecal material) produced by larvae can also be a problem as it contaminates heads and foliage.

Life Cycle:
Adult cabbage loopers overwinter in the south and migrate into Wisconsin from mid-July through September.  The female moths lay white eggs singly on the lower leaf surfaces in July.  Four to five weeks after hatching, the larvae pupate.  Moths emerge 10 to 14 days later, mate, and lay eggs which give rise to a second generation.  This generation causes the most damage to cole crops in Wisconsin.

Scouting Suggestions:
Scout fields weekly throughout the season for damage.  Check plants carefully, even if no feeding damage is apparent, to look for eggs that will hatch into small caterpillars several days to a week later.  Examine the lower leaves of plants for the larvae of each pest.  Although feeding damage and fecal material are signs of activity, it’s better to rely on larvae counts to determine the level of infestation.  Caterpillars cause varying amounts of damage depending on the maturity of the plant, so the need for treatment changes as the crop grows.  Keep a record of the life stage and the percentage of plants infested.  This information will be useful for monitoring whether the population is increasing or decreasing.

Treatment thresholds are well established and are based on the percent infestation by any lepidopteran species and varies based on the stage of crop development.  Cabbage, broccoli, and cauliflower in the seed bed are particularly susceptible to damage and therefore when 10% of the plants are infested with cabbage loopers, diamondback moths or imported cabbageworms, control is warranted.  For cabbage between transplant and cupping, the economic threshold (ET) is raised to 30%.  Once the plants have begun to cup, until early heading, if greater than 20% of plants are infested, treatment is warranted.  From early heading until harvest, the threshold drops back to 10% to protect the market quality of the produce.  For broccoli and cauliflower between transplant and first flower or curd, the threshold is increased to 50%.  However once flowers or curds begin to develop, the economic threshold drops back to 10% to maintain a high level of quality.

Control
Cultural:
Effective integrated pest management (IPM) programs for cabbage looper should be designed to prevent damage, encourage natural control, and avoid resistance.  The use of transplants that are free of larval contamination is a key step in avoiding damage.  Floating row covers can provide a physical barrier to cabbage loopers in small cole crop plantings.  Natural controls are frequently quite effective in preventing buildups of cabbage looper populations.

Chemical:
Bacillus thuringiensis var Kurstaki or Aisawai applied to early instar larvae can be very effective in controlling cabbage loopers.  Chemical insecticides can also be effective in controlling caterpillar pests of cole crops.  Refer to University of Wisconsin-Extension publication A3422 “Commercial Vegetable Production in Wisconsin” for specific insecticide recommendations.  Target early instar larvae and insure good plant coverage to improve efficacy when using insecticides.  Use pest-specific insecticides when cabbage loopers are prevalent so that natural enemies are conserved.  Resistance is a key concern with all lepidopteran pests on cole crops.