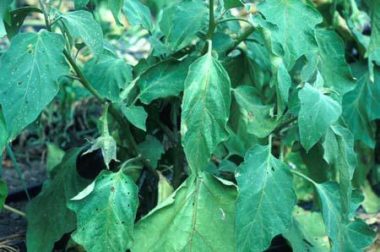 Wilting of eggplant due to black walnut toxicity.

What is black walnut toxicity? Black walnut trees (Juglans nigra) produce a toxic substance (called juglone) that prevents many plants from growing under or near them. Related trees like butternut (J. cinerea) and shagbark hickory (Carya ovata) also produce juglone, but in lower concentrations than black walnut. Juglone occurs in all parts of black walnut trees, but especially in buds, nut hulls and roots. The toxic effects of a mature black walnut tree can extend 50 to 80 feet from the
trunk of the tree, with the greatest toxicity occurring within the tree’s dripline. In this area, plants susceptible to juglone may wilt or die; plants tolerant to juglone will grow normally. Vegetables such as tomato, potato, eggplant and pepper, and ornamentals such as lilac, peony, rhododendron and azalea are particularly sensitive to juglone. What do the effects of black walnut toxicity look like? Plants sensitive to juglone may be stunted, have yellow or brown, twisted leaves, exhibit wilting of some or all plant parts, and die over time. Often, the vascular (i.e., water-conducting) tissue of affected plants will be discolored. Symptoms may occur rapidly, even within a few days after sensitive species are transplanted into a walnut tree’s root zone. Alternatively, some plants may survive for years near a young walnut tree, but will wilt and die as the tree increases in size. Black walnut toxicity can be confused with wilts caused by bacterial and fungal pathogens.
How do I avoid problems with black walnut toxicity? There is no cure for a plant affected by walnut toxicity. Removing a walnut tree may not be practical as the tree could be the focal point in a landscape. In addition, even if a walnut tree is removed, juglones will not immediately be eliminated, because it is next to impossible to remove all root pieces from the soil and remaining pieces may continue to exude toxins for several years as they decay. When establishing a garden around a walnut tree, try to plant species that are tolerant to juglone (see table on the reverse side). If you are growing sensitive species near a walnut tree, transplant them elsewhere in your garden. If you must grow sensitive plants near a black walnut, keep beds free of walnut leaves and hulls and remove walnut seedlings as they appear. Growing shallow rooted woody and herbaceous plants, and improving drainage can also diminish the effects of juglone. Alternatively, consider building raised beds with wood, stone, or concrete barriers that limit root growth through and under the beds. When disposing of bark and wood from a walnut tree, do not use these materials for mulch.

The information in the following table is intended to provide guidance in selecting plants to grow near walnut trees. Inclusion of plants in this table is based on observation, not on formal testing. In addition, the plant lists in this table are by no means exhaustive. Oftentimes the juglone sensitivity or tolerance of specific plants has never been observed or documented. Finally, sources often disagree on whether particular plants (e.g., columbine, lily, narcissus, tulip) are juglone sensitive or tolerant. Some varieties may be susceptible while others are tolerant. Most plant species with conflicting information regarding their sensitivity or tolerance to juglone have not been included in the table.