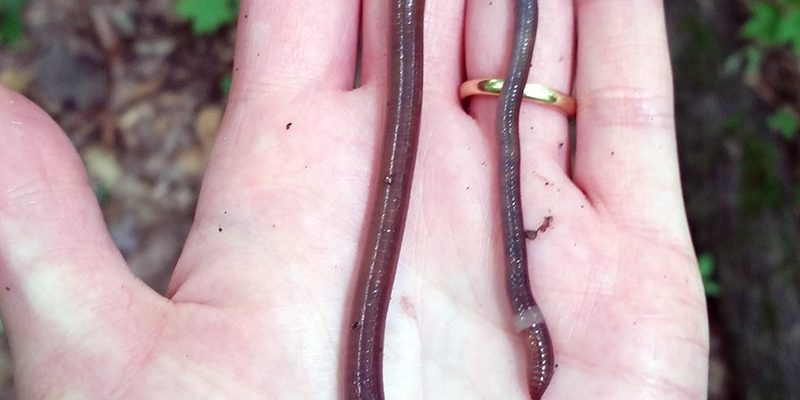 Native to East Asia, jumping worm was found in Wisconsin in 2013. Jumping worms feed on soil organic matter, leaf litter and mulch and create very grainy-looking and hard little pellets when they excrete. The ‘changed’ soil resembles large coffee grounds, and has poor structure for plants to grow in. Also, the worms feed on the organic matter that plants, fungi and bacteria need for nutrients, removing much of it from the soil ecosystem.
The worms are parthenogenetic, producing eggs without the need for a mate, so just one worm can start a new population. Jumping worms resemble regular earthworms (which are also not native here) but there are some important differences. Unlike other earthworms, they don’t produce slime and are more gray or brown in color than pink. Their clitellum, the band of lighter-colored tissue near the head is smooth, not raised like other earthworms and whitish, not pink. The body is more turgid as well.
Jumping worms get their name from their behavior—when handled, they thrash violently, may jump into the air or shed their tails. Adults die in winter, but their larvae overwinter as microscopic cocoons in the soil or leaf litter (which is why you don’t see them right away in spring). After hatching in late June, each worm begins reproducing; their life cycle lasts 60 days, so we can have two generations easily each year.  (Written by Lisa Johnson, Dane County Horticulture Educator).

To learn more about Jumping worms, check out the following resources: