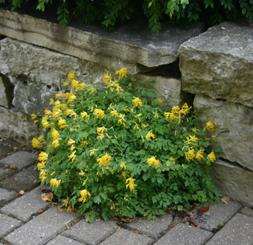 What is yellow corydalis?  Yellow corydalis (Corydalis lutea = Pseudofumaria lutea) is a shortlived perennial in the bleedingheart family (Fumariaceae).  The genus Corydalis has approximately 300 species, and the name derives from the Greek ‘korydalis’ meaning crested lark, a reference to the fact that the plants’ flowers resemble a lark’s head.  Other common names of yellow corydalis include yellow fumitory, hollowort, and yellow larkspur.  Native to the southern Alps of Europe, this plant is hardy in zones 4 through 8.

Yellow corydalis plants form neat mounds of finely cut, delicate-looking light-green to blue-green foliage, somewhat resembling the foliage of maiden hair ferns or bleeding hearts.  The pinnately compound leaves have three lobes, and are pale green above and glaucous (i.e., waxy) below.  The leaves are borne on weak, hollow and fleshy stems.  Plants grow up to 18 inches tall, but often are much shorter.

In mild climates, yellow corydalis remains evergreen (although not necessarily attractive), but in climates with colder winters, dies back to the ground.  In very hot summers or during drought, plants may also die back, but they often resume growth in the fall when cooler, moister conditions prevail.  In Wisconsin’s relatively cool climate, when planted in a moist site, yellow corydalis does not die back at all.  This is in contrast with the majority of other Corydalis species that are more easily heat-stressed and prone to dieback.

As its name suggests, yellow corydalis produces bright, golden-yellow flowers.  It blooms over a long period, from late spring through frost.  The one to two inch long flowers have four petals arranged in an irregular tubular shape with a spur in the back.  Flowers are borne in racemes of six to 16 flowers on stems that rise above the foliage.  Slender, dehiscent capsules (i.e., seed pods that naturally break open along a seam) follow the flowers.  Capsules eventually burst to scatter their seed.

In addition to C. lutea, there are other Corydalis species with yellow flowers that are suitable for use in the garden.

• C. aurea (hardy to zones 3 through 8) is known as scrambled eggs and is a biennial that produces small flowers in the spring of the second year of growth.
• C. cheilanthifolia (hardy to zones 4 through 9) has fern-like leaves and upright, butter-yellow flower clusters.  The leaves become bronze in the fall.
• C. ochroleuca (hardy to zones 5 through 8) has blue-green leaves, with creamy yellow-white flowers with green lips and yellow throats.

While useful as an ornamental, yellow corydalis does have one potentially problematic characteristic.  It is toxic to horses, causing mouth sores, gingivitis, colic and sudden death (if enough is ingested).  Therefore, yellow corydalis should not be allowed to invade pastures.

Where do I get yellow corydalis?  Yellow corydalis plants are available at many nurseries and garden centers that stock perennials.  Once established in the garden, this plant tends to self-seed prolifically, and can become somewhat weedy in certain conditions, although it is easily removed where not wanted.  Yellow corydalis commonly establishes around stone walls or in gravelly soil.  Seedlings can be transplanted in early spring.  However, established plants often do not perform well if moved.  If you do transplant yellow corydalis, plants will require extra watering and will often struggle for the remainder of the season.  Yellow corydalis plants are also not easily divided, but divisions can be made in early spring.  Although it self-seeds readily, yellow corydalis is not easy to germinate indoors due to its complex dormancy requirements.  To germinate the seeds, sow them in a moist potting medium, then place them in a plastic bag and keep at room temperature (approximately 70ºF) for six weeks.  Move the seeds to near freezing conditions (28 to 38ºF) for six to eight weeks, then return to cool conditions (50 to 60ºF).  If there is no germination after several weeks, repeat the heating and cooling steps a second time.

How do I use yellow corydalis most effectively in my garden?  Yellow corydalis can be extremely attractive when used to edge borders or walkways.  In rock gardens, cottage and woodland gardens, it is a good filler and may naturalize.  It will grow well in stone walls in cool conditions.  Yellow corydalis combines well with bleeding heart (Dicentra spectabilis), lady’s mantle (Alchemilla mollis), lungwort (Pulmonaria spp.), foam flower (Tiarella spp.), hosta (Hosta spp.), leopard plant (Ligularia spp.), and many other perennials in a shade garden.  Try yellow corydalis in sunny areas under taller plants like peonies (Paeonia spp.) or daylilies (Hemerocallis spp.). 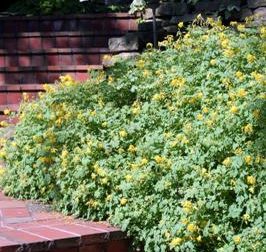