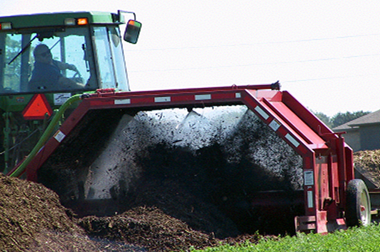 Use of properly composted mulches can be beneficial to trees and shrubs in the landscape.

What are the benefits of wood mulch?
Wood mulch is typically available as chipped wood, or shredded or chunked bark, and can contribute to tree health in many ways.  When high quality, composted mulches are applied two to four inches deep in a ring three to six feet in diameter (or greater) from the trunk of a tree, mulch can help preserve moisture, control weeds, limit damage to the trunk from mowers and string trimmers and moderate the soil temperature.  Use four inches of mulch when soils are light and well-drained, and two inches of mulch on heavier, clay soils.

Can wood mulch harm trees?
Use of improperly composted mulches (some-times called “sour mulches”), can lead to tree nutrient deficiencies.  Sour mulches can also produce gases like methane and ammonia that can be toxic to plants.  Foliage on trees surrounded by sour mulches may initially turn yellow, then brown, die and fall off.  If your mulch smells like vinegar, ammonia or sulfur, it is likely a sour mulch, and should be removed.  Replace the sour mulch with a high quality, composted mulch and consult with your local UW-Extension agriculture/horticulture about testing the soil for nutrient deficiencies.  Fertilize appropriately based on the results of these tests.

Improper application of mulch can also lead to problems.  Piling wood mulch up against the trunk of a tree can keep the bark underneath excessively wet.  This wetness can contribute to bark decay.  In addition, use of thick mulch layers (greater than four inches) can lead to overly wet soils that are favorable for development of root rots (see University of Wisconsin Garden Facts XHT1070).  To avoid these problems, make sure mulch is applied at least one to two inches away from the trunk of the tree and that the mulch layer is the appropriate thickness for the soil type in your landscape (see above).

Termites ingest wood and can be attracted to wood mulch, but new termite colonies are not likely to become established due to use of wood mulches.  Typically termites are not a problem in Wisconsin, and when colonies are found, they occur only in the southern half of the state.

Carpenter ants (see UW-Extension bulletin A3641) and powderpost beetles (see University of Wisconsin Garden Facts XHT1053) are unlikely to utilize mulch as a food source because conditions required for their development would not be satisfied by wood mulch.  Carpenter ants do not ingest wood as a food source; instead, they chew non-living wood (in trees or landscape timbers, etc.) to excavate galleries in which they live and raise their young.  Since wood mulch is composed of small wooden pieces, it would not serve as a home.  To avoid potential insect problems, keep mulch as far away from the foundation of your home as possible and seal all holes and crevices where insects might use as entry points.  Also, periodically inspect landscape timbers and the house for termites.

Does woody mulch harbor tree pathogens?  Wood mulch may come from many sources, including trees and shrubs that have died from a wide range of diseases.  To be harmful to your trees, disease-causing organisms (pathogens) would have to survive in mulch and these organisms would have to move from the mulch either directly, or through the soil, to their new host – your tree.  There is currently very little research on this topic.

Elm trees killed by Dutch elm disease (see University of Wisconsin Garden Facts XHT1076), can serve as breeding areas for native and European elm bark beetles.  Bark beetles that breed in logs or firewood from these trees can pick up the fungi that cause Dutch elm disease (Ophiostoma ulmi and Ophiostoma novo-ulmi) and carry these fungi from tree to tree.  Chipping infected elm trees creates an unfavorable environment for bark beetles yet there is no scientific literature that describes the level of risk of transmitting the Dutch elm disease fungi from wood chips or bark chunks to healthy elms.

Oak trees killed by oak wilt (see University of Wisconsin Garden Facts XHT1075) can be attractive to several sap-feeding beetles that can potentially pick up the oak wilt fungus (Ceratocystis fagacearum) and move it in the landscape.  This process is affected by moisture and temperature and would likely be disrupted by the chipping and composting process yet there is no scientific literature that describes the level of risk of transmitting the oak wilt disease fungus from wood chips or bark chunks to healthy oaks.