Celosia is a genus of edible and ornamental herbaceous annuals and perennials in the amaranth family (Amaranthaceae) native to Africa, North America and South America. Celosia spicata (= C. argentea var. spicata) is a summer annual or short-lived perennial (zones 9-11) grown as an ornamental for its distinctive, erect flower spikes sort of reminiscent of a sheaf of wheat that give it the common name of wheat celosia. C. argentea var. argentea is also used as a leaf vegetable in tropical Africa, East and Southeast Asia and other places for the soft texture and mild spinach-like taste of the foliage.

Other species of celosia commonly used as annual ornamentals are C. cristata (cockscomb), with a crested inflorescence, and C. plumosa, with fluffy, plume-like inflorescences.
C. spicata branches with many strong stems to form a bushy but open, upright plant up to 2 feet wide and 3 or more feet tall. The alternate, medium to dark-green leaves may be mottled or tinged with burgundy. The 2-6 inch long leaves are smooth and entire, oval or lance-shaped, and strongly veined.

Beginning in mid-summer, abundant erect cylindrical inflorescences are produced on the branch tips above the foliage. The terminal spikes may be red, pink, purple or bi-colored and often develop a metallic silver sheen on the calyxes that remain after the flowers fade. The hundreds of small flowers densely packed within each spike bloom from the bottom up and the spike continues to elongate as additional flowers open up along the spike so that early flower spikes can be many inches long by time the frost arrives. Blooming continues until frost but the plants are sturdy enough that they can remain upright and attractive through late fall. 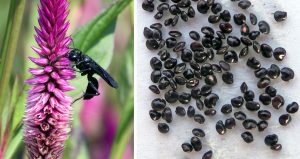 The flowers are visited by bees, wasps, butterflies, and occasionally hummingbirds. After the flowers fade, small, shiny black seeds are produced in the stiff pink to white or beige calyx that remains attractive even after the flowers are gone, so can be used as fresh or dried cut flowers (especially spikes 2-3” long; longer spikes often do not hold up as well). Celosia is easily dried by hanging small bundles of flower stems upside down in a cool, dry room with good ventilation. The seeds will fall out as they dry. These plants will self-seed readily and although the seedlings are easy to remove, it can become a weed as they set seed prolifically.

Use wheat celosia in annual or mixed beds and borders for vertical interest and contrast with mounded forms. It can be used in masses for a blast of color, or in mixed containers as the “thriller” component.

Grow celosia in full sun in moist, but well-drained soil. Pinching when young will promote more compact and bushy plants with more flowers. Taller plants or those in windy areas may need staking, but the flower spikes on plants that do tilt or fall over will turn to face upwards. These plants have few pest problems and are not favored by deer but may develop powdery mildew.
Celosias are propagated only from seed. Although they can be directly sown in the grown after the last frost, plants started indoors 6-8 weeks before the average last date of frost will be larger and have more flower spikes. Seeds must be covered and the soil should be warm for germination in 2-3 weeks. Transplant carefully as they do not like to be disturbed.
There are many cultivars and hybrids with C. spicata as one parent available, including: