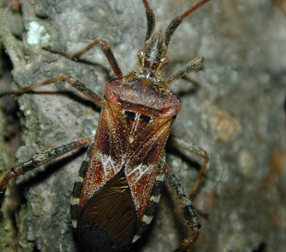 Western conifer seed bugs have become more numerous in Wisconsin during the last five years.  They can become a nuisance when they crawl up the sides of buildings during September and October.  Sometimes they cluster in small groups and enter buildings at the onset of cold weather as they seek a protected site to spend the winter.  If they can crawl under siding or through other openings into the home, these insects will overwinter in the house and re-emerge on warm, sunny days during the winter and spring months.  Western conifer seed bugs do not bite or cause damage in the home.

Control:  The first line of defense against Western conifer seed bugs is to prevent their entry into the home.  Screen attic, overhang, and wall vents to mechanically block points of entry for the insect.  Eliminate or caulk gaps around door and window frames and soffits, and tighten loose-fitting screens, windows or doors.  Insecticidal soap sprays or general insecticides can be used to kill insects clustered on the outside during the fall.  When adults find their way indoors, simply vacuum or hand-remove them.