The kiwi is a flightless bird native to New Zealand, a name New Zealanders like to call themselves, and also a fruit – one of the very few temperate fruit crops to have been domesticated the twentieth century. Native to the high grasslands, low scrub and forests of China and Russia, Actinidia deliciosa was still just a wild plant in China (a delicacy called Yang Tao) at the turn of the century. In 1904 seeds were imported into New Zealand (and about the same time into the U.S. and Europe), and after a little selection, the fuzzy brown fruits with green flesh were renamed kiwifruit (from Chinese gooseberry) and developed into a successful export crop. Today the kiwifruit is an important commercial crop in New Zealand, the United States, Italy, Japan, France, Greece, Spain, Australia, and Chile, with the more than a million tons of fruit per year distributed worldwide.

Most of the kiwifruit grown in commercial orchards outside of China are a single variety, ‘Hayward,’ descended from two female plants and one male plant derived from a single introduction of seed. Grafted plants were first sold in the 1920’s, standardizing the type of fruit produced. ‘Hayward’ has large, oval fruits with bright green flesh that lack a hard or woody core.
But this is not the only type of kiwifruit. The genus Actinidia contains about 60 species. All are perennial, mostly deciduous, climbing woody vines native to Asia but their fruit is quite variable. Some produce fruits singly, others in bunches. The fruits vary in size, shape, hairiness, and color. The flesh can also vary in color, juiciness, texture, and taste, with some fruits being basically inedible while others are considered better than the standard kiwifruit. 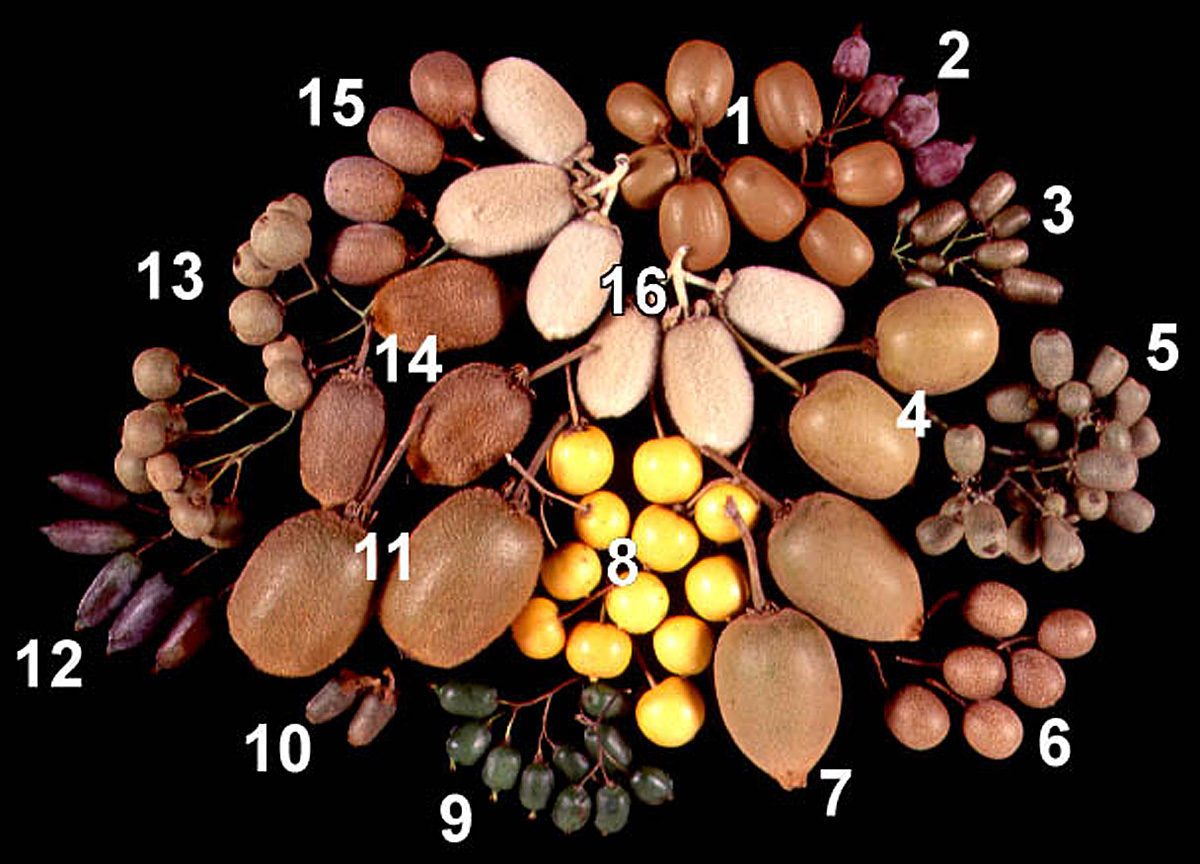 Fruit diversity in Actinidia, with the commercial kiwifruit, A. deliciosa ‘Hayward’ for comparison.

In the 1980’s, a new commercial yellow-fleshed variety was created in New Zealand by crossing the conventional A. deliciosa with A. chinensis, which comes from warmer parts of China. This smooth-skinned Vespri Gold cultivar — with a sweeter, more tropical taste and higher vitamin C content than the common ‘Hayward’ variety — was released in 2000. A. arguta has been introduced commercially in New Zealand and other cultivars may be developed.

The standard kiwifruit found in your local market is not a tropical fruit as many consumers believe but does require a long growing season (over 200 days) and cannot tolerate winter temperatures below 10ºF. But this doesn’t mean you can’t grow kiwifruit here in Wisconsin. Some species of hardy kiwifruit will survive temperatures as low as -40ºF, and some produce fruit that are even sweeter and more flavorful than the commercial kiwifruit.

The two most commonly available hardy species are A. arguta and A. kolomikta. A. arguta (with common names including Hardy Kiwi, Bower Vine, Dessert Kiwi, Cocktail Kiwi, Tara Vine, Yang Tao) produces smooth and hairless, grape-sized fruit in reds and greens with a sweet flavor similar to the commercial kiwi. A. arguta has a strong-growing vine to 40 feet, with dense, dark green foliage. In its native Asian habitat, the vines typically grow wild in trees, climbing as high as 100 feet. When fully dormant the plants can withstand -25°F (Zone 4), but they still need a long growing season (about 150 frost-free days) and must acclimatize to cold. Sudden temperature drops may cause trunk splitting and subsequent damage to the vine. Young shoots, flower buds, and flowers are vulnerable to frost injury, and can be damaged in as little as 30 minutes at 30°F. The plants can be grown in large containers, however, to provide suitable temperatures but do need a certain amount of winter chilling. There are many varieties of A.arguta; probably the most popular is ‘Ananasnaya,’ commonly called ‘Anna.’

Super-hardy kiwi, A. kolomikta, is even more cold hardy, tolerating temperatures to -35 or -40°F (Zone 3) but is much less vigorous than A. arguta, growing only to about 20 feet. It produces fruit similar to A. arguta but somewhat smaller. ‘Arctic Beauty’ is a commonly-offered variety. The male vines develop attractive pink, white and green variegated leaves the second to third year after planting.

The white to cream flowers are produced in the leaf axils, singly or in small groups for a period of several weeks in late spring. All species appear to be dioecious (with both male and female parts on a single plant), but are functionally monoecious (male and female parts on different plants). Flowers on male vines produce viable pollen but lack a fully developed stigma and ovary, while the flowers of female vines don’t have viable pollen. The one exception is the self-fertile variety ‘Issai,’ which tends to have small fruit and relatively low vine vigor. The transfer of pollen from male to female flowers is essential for fruit production and fruit set of the female flowers depends on adequate pollination by bees or other pollinators. One male vine may supply enough pollen for four females. Female flowers are viable and receptive to male pollen up until 9 days after opening, while the pollen from male flowers is viable for only 3 days after opening. Home gardeners can hand pollinate by picking a freshly opened male flower and rubbing it on a viable female flower for a second or two. One male flower can be used on as many as five female flowers before discarding it.
Hardy kiwifruits ripen in late summer to late fall, depending on the cultivar and local weather conditions. The fruits drop or come off easily when they are fully ripe. However, they are usually picked at the mature-ripe stage and allowed to ripen off of the vine as for the commercial types. Store-bought kiwis are ready to eat when slightly soft to the touch. The firmer the flesh the more tart the flavor will be. To speed up the ripening process, place the fruit in a bowl with ethylene-producing fruits such as apples, pears or bananas.

All kiwifruit plants require a wall, fence, substantial trellis, or other permanent place to grow upon (even in trees) since the long-lived plants climb by twining. The vines do best in a sunny location with well-drained, somewhat acid (pH 5 - 6.5) soil. Vines grow and produce best in areas sheltered from constant or gusty winds. Winds of only 10 to 15 miles per hour or can break developing shoots and reduce vine growth and production. Tall hedges are used in New Zealand kiwifruit orchards to help reduce wind damage. The plants need constant moisture, but not soggy soil, and are heavy nitrogen feeders. Winter pruning is necessary for good fruit production.
Hardy kiwis don’t have many pests or diseases, but deer will browse on the leaves and rodents may attack the roots. Cats may damage the plants since they love to rub against the catnip-scented trunk – this activity will damage new shoots emerging in the spring on small plants!
– Susan Mahr, University of Wisconsin – Madison