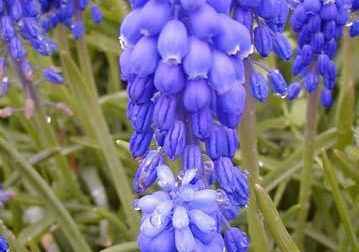 What is grape hyacinth? Grape hyacinth (Muscari armeniacum) is a mid-spring-blooming, perennial bulb in the lily family (Liliaceae) that is native to southeastern Europe.  Grape hyacinth’s common name refers to the plant’s clusters of small, bell-shaped, cobalt-blue flowers (with narrow, white rims) that look like clusters of grapes.  The scientific name Muscari comes from the Greek word for musk, and refers to the mildly sweet fragrance, variously described as slightly grassy or grapey, that is produced by the plant’s flowers.

What is grape hyacinth?  Grape hyacinth (Muscari armeniacum) is a mid-spring-blooming, perennial bulb in the lily family (Liliaceae) that is native to southeastern Europe.  Grape hyacinth’s common name refers to the plant’s clusters of small, bell-shaped, cobalt-blue flowers (with narrow, white rims) that look like clusters of grapes.  The scientific name Muscari comes from the Greek word for musk, and refers to the mildly sweet fragrance, variously described as slightly grassy or grapey, that is produced by the plant’s flowers.

Grape hyacinth grows four to eight inches tall, and produces floppy, narrow, green leaves that emerge from the ground in early spring.  The leaves are soon followed by the plant’s flowers.  Each bulb produces one to three flower stalks with 20 to 40 tightly packed flowers per stalk.  Following flowering in early summer, the plant’s foliage dies back.  However, unlike many other spring-blooming bulbs, grape hyacinth starts growing actively again in mid-fall and persists through the winter.  Grape hyacinth is hardy in USDA zones 3 through 9.

There are several varieties of M. armeniacum and M. botryoides, another early spring bloomer that is virtually indistinguishable in appearance from M. armeniacum.

•‘Album’ is white-flowered and fragrant, but not as vigorous as the standard type.
•‘Blue Spike’ is flax blue with double flowers, and blooms slightly later than the standard type.
•‘Fantasy Creation’ has double blue flowers that may develop green overtones as the flowers age.
•‘Saffier’ has sterile, blue flowers that are longer lasting than most varieties.
•‘Superstar’ has densely packed white-edged, periwinkle-blue florets, topped with a cap of paler florets.

In addition to M. armeniacum, there are about 40 other species of Muscari.  Only a few of these are widely available as ornamentals however.

•M. azureum grows four to six inches tall and has bright blue flowers that open more widely than M. armeniacum.  The variety M. azureum alba has white flowers.
•M. comosum or tassel hyacinth, is a somewhat rarer species that grows eight to 12 inches tall and blooms in late spring, producing flowers that are a purplish brown.
•M. latifolium is native to pine forests in Turkey and grows six to 12 inches tall.  This variety produces only one leaf and in early spring produces bi-colored flowers, with pale blue florets on top and dark blue-black florets on the bottom.  M. latifolium prefers cooler climates (USDA zones 2 though 5).
•M. plumosum (also commonly classified as M. comosum plumosum), or feather hyacinth, has sterile and threadlike, purple-blue flowers that create the appearance of a feathery plume.

Where do I get grape hyacinth?  This ornamental is best initially established by planting bulbs that can be purchased at your local garden center.  Select bulbs that are large, firm (not soft), and free of gashes and other blemishes.  Avoid bulbs showing any signs of fungal growth (e.g., colorful masses of spores) on their surfaces.  Once established, grape hyacinths readily naturalize, reproducing by division and self-seeding.  Note that in some situations, grape hyacinths can become invasive.

How do I grow grape hyacinth?  Plant grape hyacinth in the fall in well-drained soil.  It tolerates both sunny and shady conditions.  Plants in full sun tend to have better vigor, however, while those planted in partial shade tend to flower for a long period of time.  When planting bulbs, place them three to four inches deep and two inches apart.  Use bone meal at the time of planting, as well as after blooming, to improve grape hyacinth performance.  Be sure that plants are well-watered during leaf growth and flower production, but reduce watering after the foliage begins to die back.

How do I use grape hyacinth most effectively in my garden?  Grape hyacinths work well when they are planted in rock gardens, in the front of flowerbeds and borders, or along walkways and paths.  They also mix well with other early blooming bulbs, and are a popular container plant.  Grape hyacinths have their greatest impact when they are grown in masses and loose drifts.  They are particularly attractive when allowed to naturalize under trees and shrubs.  Because grape hyacinth tends to releaf in the fall, this plant can provide an attractive element to a garden in the fall and winter landscape if weather conditions are mild.  In addition, grape hyacinth is an excellent cut flower and can be used for indoor forcing [see University of Wisconsin Garden Facts XHT1144 (“Forcing Bulbs”) for details].

There is a famous planting of grape hyacinth at Keukenhof Gardens in The Netherlands known as the Blue River.  This dense planting of M. armeniacum winds past trees, shrubs, and other spring flowers, giving the illusion of a flowing blue river.  You can attempt to duplicate this effect in your own garden.  However, such a planting requires a substantial number of bulbs and may be cost prohibitive. 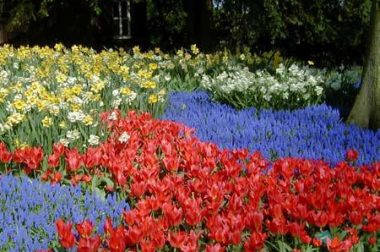 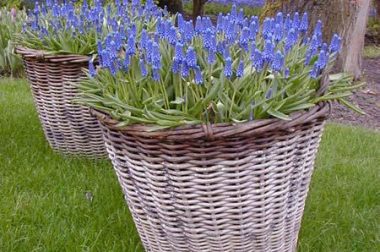