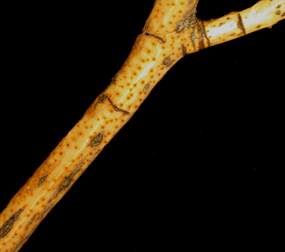 A yellow branch with orange spots typical of golden canker on pagoda dogwood.

What is golden canker?
Golden canker (officially Cryptodiaporthe canker) is a visually distinct and increasingly common disease of alternate-leafed dogwoods such as pagoda dogwood. This disease can potentially be lethal if infections occur on the main trunk of a tree.

What does golden canker look like?
Initial symptoms of golden canker include wilting and death of leaves on infected branches, followed by branch dieback. Infected branch tissue turns a bright, golden-yellow color. Oftentimes orange spots will be visible scattered over this yellow tissue. These spots are fruiting bodies (reproductive structures) of the fungus that causes the disease.  If unchecked, golden canker can spread from infected branches to the main trunk, resulting in the death of the tree above the point of trunk infection.

Where does golden canker come from?
Golden canker is caused by the fungus Cryptodiaporthe corni, which survives in infected branches. The exact means by which this fungus is spread is not known.

How do I save a tree with golden canker?
The only effective way of managing golden canker,once infections have occurred, is by removing diseased branches. Prune four to six inches below the golden-yellow tissue on each infected branch. To prevent accidental spread of the golden canker fungus from branch to branch, and from tree to tree, be sure to disinfest pruning tools between each cut by dipping them for at least 30 seconds in a 10% bleach solution or alcohol (spray disinfectants that contain at least 70% alcohol can also be used). Dispose of infected branches by burning or burying them. Fungicide treatments are not currently available for this disease.

How do I avoid problems with golden canker in the future?
Reduce tree stress as much as possible. Plant new pagoda dogwoods in cool,shaded sites. Properly mulch dogwoods to help keep their root systems cool and moist. Make sure trees receive sufficient water (approximately one to two inches per week for newly transplanted trees; approximately 1 inch per week for established trees). Fertilize trees based on soil nutrient tests.