What is cane blight?  Cane blight is a fungal disease that affects the health of canes (i.e., stems) of cultivated and wild Rubus species (e.g., raspberries and blackberries), wherever they are grown.  Black and purple raspberries appear to be more susceptible to cane blight than red raspberries, but all commonly cultivated raspberry cultivars can get the disease.  Although cane blight is not typically fatal, it may cause significant fruit yield losses if left unmanaged. 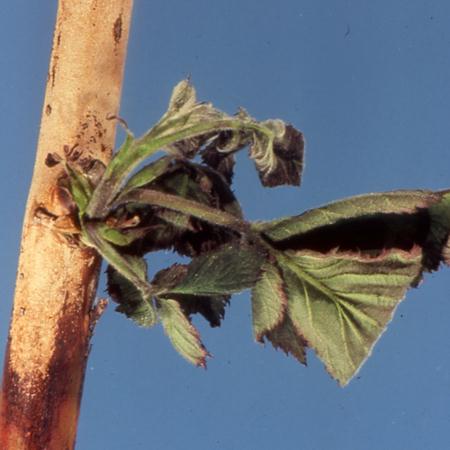 Cane death on a thornless blackberry caused by cane blight. Look for a dark brown infection line and dead/dying shoots above the point of infection. (Photo courtesy of Michael Ellis, The Ohio State Univ.)

What does cane blight look like?  Symptoms of cane blight usually first appear in early summer after blossoming and leaf emergence, and in association with wounds caused by pruning or harvesting of fruit.  Look for sudden death of side branches and tips of fruit-bearing canes, as well as dark brown or purple spots (called cankers) on the canes below the dieback.  In wet weather, cankers may produce a grey ooze.  In dry weather, the cankers may appear fuzzy or powdery.  Dead canes may become brittle and snap off in windy conditions.

Where does cane blight come from?  Cane blight is caused by the fungus Leptosphaeria coniothyrium which survives the winter in infected canes.  During wet periods, the fungus produces windborne spores and infects through open wounds on canes caused by pruning, harvest damage, insect damage, or abrasions from canes rubbing together.  As the disease develops, the fungus produces additional spores that can spread to other wounds by wind and splashing water, leading to additional infections.

How do I save plants with cane blight?  DO NOT prune infected canes during the growing season as pruning wounds will provide the cane blight fungus easy entry into healthy tissue.  Label symptomatic canes as you see them and prune the canes to the ground during the dormant season (i.e., mid- to late winter).  Also prune any older cane stubs at this time to remove them as a source of abrasion and wounding for newer canes.  Pruning when plants are dormant allows ample time for wounds to close at a time of year when spores of the cane blight fungus are not being produced.  Use only sharp tools for pruning, and disinfest pruning tools after each cut by dipping them for at least 30 seconds in 10% bleach or 70% alcohol (e.g., rubbing alcohol).  Spray disinfectants that contain approximately 70% alcohol can also be used.  Dispose of any canes that you prune by burning them (where allowed by local ordinance), deep burying them, or arranging to have them hauled away through municipal brush collection.  Be patient as you attempt to get cane blight under control; it may take two or more years of pruning and good sanitation to reduce cane blight to negligible levels.

How can I prevent cane blight in the future?  When establishing a new raspberry patch, choose a site that is well-drained and sunny, and make sure that the distance between rows is approximately 18 inches.  Also be sure to keep weeds under control.  Proper site selection, row spacing and weed control will promote good airflow and drainage, and will reduce excessive moisture that is favorable for spore production by the cane blight fungus.

In addition, maintain optimum soil fertility.  If you underfertilize plants, they will produce weak canes that are less able to fend off infections by the cane blight fungus.  If you overfertilize plants (particularly with nitrogen), they will produce succulent new growth that is more prone to breakage and more prone to wounding by certain insects that will use the new growth as food.  Remember that wounds of any kind can provide entry points for the cane blight fungus.  For details on properly fertilizing raspberries, see University of Wisconsin-Extension bulletin A1610, “Growing Raspberries in Wisconsin” (available at http://learningstore.extension.wisc.edu/Growing-Raspberries-in-Wisconsin-P750.aspx).