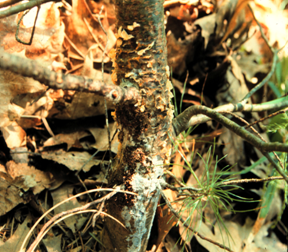 What is white pine blister rust?

White pine blister rust is a serious, tree-killing disease of eastern white pine and its close relatives (pines with needles in bundles of five).  This disease is caused by the exotic (not native) fungus Cronartium ribicola, which was introduced into North America in the early 1900’s.  This pathogen is now found in most regions where pines grow in the United States, including Wisconsin.  White pine blister rust affects trees of all ages, but perhaps most frequently and severely damages seedlings and saplings.

Where does white pine blister rust come from?

The white pine blister rust fungus Cronartium ribicola requires two different plant hosts to complete its complex life cycle.  Spores of the fungus produced on white pine are blown to alternate host plants in the genus Ribes (gooseberries and currants).  After infecting gooseberry and currant bushes the fungus multiplies rapidly throughout the summer, repeatedly producing spores that germinate to result in additional gooseberry and currant infection.  Spores produced in late summer on gooseberries and currants are spread by the wind to white pines, where needles that are moist from rain, fog, or dew are infected.

Infection of needles by Cronartium ribicola results in development of yellow to brown spots and bands.  The fungus slowly grows through pine needles and bark to eventually form cankers on twigs, branches, and trunks (main stems) of trees.  A canker is a localized diseased area, which may be swollen or sunken, that is surrounded by healthy tissues.  A typical white pine blister rust canker has resinous margins, and may appear “blistered” before rupturing to expose fruiting bodies (reproductive structures) with yellow to bright orange spores of Cronartium ribicola.  As a canker expands to completely encircle stems, all portions beyond the canker are killed.  Dead white pine branches may temporarily retain orange to red dead needles to form a bright “flag” that is a common symptom of this disease.

Can I save a tree affected by white pine blister rust?

There is no “cure” for a tree with a white pine blister rust canker on its main stem.  As the canker expands to completely encircle the trunk, all parts above the canker will die.  Branch cankers that extend to within four inches of the trunk, probably indicate that the trunk already is colonized  by the fungus and future development of a main stem canker is likely.  Pruning off branches on which cankers are located farther from the trunk, however, can prevent the fungus from growing into the trunk.  These branch cankers can be removed by pruning at least six inches beyond any visible symptoms on the trunk side of the cankered branch.  Removal of branch cankers and trees with main stem cankers prevents production of spores that are spread to gooseberries and currants.  The fungus quickly dies in discarded branches and trunks and presents no further danger to either of its hosts.

How do I avoid future problems from white pine blister rust?

Infection of pine is most frequent in proximity to diseased gooseberries or currants.  Therefore, removal of these alternate hosts (especially within 200 feet) can greatly reduce incidence of white pine blister rust.  Gooseberries or currants can be killed by uprooting them or by application of herbicides in accordance with label directions.

Conditions that promote or prolong needle wetness should be avoided.  These include use of sprinklers that wet the needles of ornamental trees, dense plantings, growth of weeds surrounding young trees, or planting white pines in low-lying, chronically moist areas near water or sites that lack good air movement.  Growing white pines under a hardwood overstory that will intercept evening dew can help keep needles dry and reduce infection.

Regular inspection allows prompt detection and removal of cankered branches on young trees.  Also, because infection very often occurs on needles of low branches, pruning to remove healthy branches (if aesthetically acceptable) will reduce the likelihood of this disease.  When trees are five to seven years old, starting close to the ground, prune off all branches up to no more than one-third to one-half the height of the tree.  Branch pruning can be continued every other year until the lower eight to nine feet of trunk is free of branches.

Planting or measures to encourage natural regeneration of conifer species other than white pines (including red or jack pines, spruces, firs, arborvitae, hemlock, and junipers) might be considered, especially in the presence of gooseberries or currants and where moisture conditions favor infection.

Use of protectant fungicides may be a management practice in white pine production nurseries.  Nursery stock should be carefully inspected, because the planting of diseased white pine seedlings is one way Cronartium ribicola has been spread into previously disease-free locations.