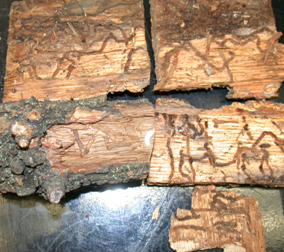 The most important insect cause of oak mortality is the two-lined chestnut borer (Agrilus bilineatus).  This insect is attracted to stressed and weakened oaks.  Environmental extremes (e.g., drought), construction injury to roots, soil compaction, road salt injury, defoliation by leaf-feeding insects, storm damage and weakening from disease are all stresses that predispose trees to two-lined chestnut borer attack.

Appearance:  Adult two-lined chestnut borers are elongated, greenish-black metallic wood boring beetles that are about 1/5 to 1/2 inch in length.  They have two yellow stripes along their backs.  Larvae are slender, legless and white, and have a small, flattened area behind their heads.

Symptoms and Effects:  Two-lined chestnut borers attack many types of oaks, including red, black, white and bur oaks.  Symptoms include dieback at the end of branches, sparse, small or discolored foliage, or leaves that wilt suddenly, turn uniformly brown and typically remain attached to the branches.

Leaf browning, and twig and branch death occur when two-lined chestnut border larvae feed under the bark and destroy the nutrient and water conducting tissues (i.e., the phloem and xylem).  This girdles and kills the branches above the point of feeding.  Death of a tree due to a two-lined chestnut borer infestation may take from one to five years.  To confirm chestnut borer activity, peel away the bark on dead or dying branches or trunks.  Look for slender, whitish larvae and thin, random, feeding galleries (trails) under the bark.

Life Cycle:  Two-lined chestnut borers overwinter as larvae and pupae in infested trees.  Adult beetles emerge from trees through D-shaped holes in late May and are active until early July.  Eggs are inserted into bark crevices and hatch in one to two weeks.  Larvae feed in cambial tissue and cut off the vessels that transport food and water in the tree.  There is one generation of two-lined chestnut borer per year.

Control:  The best defense against two-lined chestnut borer is prevention.  Healthy, non-stressed trees will not attract two-lined chestnut borer adults, and vigorous trees are able to fight off invading borers.  Water oaks (approximately one inch of water per week) during dry periods to minimize drought stress.  Avoid compacting soil, or changing the soil grade or water drainage pattern during construction.  Also avoid damaging the bark; or allowing significant defoliation by insects such as gypsy moth, canker worm, or forest tent caterpillar.  Remove and dispose of any two-lined chestnut borer-infested wood before beetles emerge in mid-May.  Cover all oak woodpiles with plastic tarps from mid-May through mid-July to limit borer movement.  Systemic insecticides that are applied to trees by drenching or injection (e.g., those containing imidacloprid) can also be used for control.  These products are best applied by a professional arborist.  Trees with significant dieback will be difficult to save.