Squash bugs (Anasa tristis) are an emerging problem in Wisconsin.  In recent years, these insects have become more prevalent, causing damage to vine crops in home gardens and commercial fields alike.  Squash bugs feed on all vine crops, but pumpkins and squash are their preferred hosts, followed by gourds and melons.

Appearance:  Adult squash bugs, which often congregate in large numbers, are 1/2 to 3/4 inches long, mottled brownish-black and flattish.  They give off a strong odor when crushed.  Immature squash bugs (nymphs) initially have red heads and legs with whitish-green bodies.  Later they develop black heads and legs with gray bodies.  Squash bug eggs are 1/16 inches in diameter and reddish-orange to brown in color.  They are laid in clusters on the undersides of leaves along the center vein.

Symptoms and Effects:  Adult and immature squash bugs feed on plant juices and release toxins into leaves.  Early symptoms of an infestation include yellow spotting on the leaves.  Leaves may eventually become dry and brown or black along the edges.  Feeding can also cause wilting which may appear similar to bacterial wilt [see University of Wisconsin Garden Facts XHT1229 (Bacterial Wilt of Cucurbits) for details].  Young plants are more susceptible to severe damage.  Later in the season, adults will also feed on fruit, which may stop developing and begin to rot.

Life Cycle:  Adult squash bugs overwinter in Wisconsin in protected areas (e.g., in stacks of firewood, in wooded areas or along fence rows).  Adults mate after they emerge in the spring and females lay eggs in late June and early July when vine crops begin to develop.  Eggs hatch after about 10 days.  Nymphs undergo five molts over a period of four to six weeks before reaching maturity.  New adults appear in late July and early August.  There is only one generation of squash bugs per year, but because females lay eggs over an extended period of time, all life stages may be present on plants at once.

Scouting:  The key to managing squash bugs is early detection.  Although it is unusual to find large populations of squash bugs early in the season, be sure to check transplants and new seedlings for adults.  Squash bugs tend to hide on the undersides of leaves where they are protected and may be difficult to find and control.  A degree day model [see University of Wisconsin Garden Facts XHT1086 (Degree Day Calculation) for details] can be used to predict the development of squash bugs.  Using a base temperature of 58°F, eggs will appear at 193 degree days (DD) and nymphs will emerge at 554 DD.  Inspect the undersides of leaves for squash bug eggs beginning in early July. 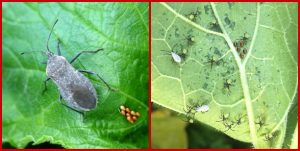 Cultural:  Destroy plant debris from your garden or production field in the fall to reduce the number of overwintering adults.  Burn, bury or hot compost these materials.  Destroying plant debris from areas adjacent to your garden or production field can also help limit squash bug overwintering.  Use crop rotation [see University of Wisconsin Garden Facts XHT1210 (Using Crop Rotation in the Vegetable Garden) for details] to reduce the likelihood of a future infestation.  Consider trellising vine crops where possible, as trellised plants are less susceptible to squash bug infestations.  In smaller plantings, place boards on the ground near vine crops.  Squash bugs will congregate at night under the boards and can then be collected each morning and killed by dropping them into a bucket of soapy water.

Chemical:  When plants are in the seedling stage, treat if plants are visibly wilting and squash bugs are present.  In older plants, the threshold for treating for squash bugs is one egg mass per plant during the period of when plants are flowering.  Apply foliar applications of registered insecticides when eggs are hatching to target nymphs, which are more easily controlled by insecticides than adults.  See Commercial Vegetable Production in Wisconsin (Extension Bulletin A3422, available at https://learningstore.extension.wisc.edu/) for a complete listing of products.  Note that not all of the listed products may be available for use in home gardens.