Shooting stars are a group of herbaceous perennials in the primula family (Primulaceae). There are over a dozen species in the genus Dodecatheon, all native to North America. The most widespread and common one is D. meadia (sometimes classified as Primula meadia), variously called shooting star, eastern shooting star, American cowslip, roosterheads, or prairie pointers.

This ephemeral spring wildflower from central and eastern US (southern Wisconsin to western Pennsylvania and south to eastern Texas and Georgia) is generally found growing in moist meadows, prairies, and open woods in zones 4-8. It is frequently used as a garden ornamental and received the Royal Horticulture Society’s Award of Garden Merit in 1993.
Basal rosettes are produced from a fibrous root system in early spring. The smooth, lance-shaped leaves up to 6” long and 2½” across are emerald to greyish green, often with a reddish base and with a prominent central vein and smooth margins. The foliage only persists into summer, with plants going dormant after that. Over time rosettes may offset, with new plants developing slowly.

In mid-spring one or more thin but sturdy, green or red, leafless flower scapes up to 18 inches tall are sent up from the rosette of leaves. Each terminal umbel has 8-20 flowers that open in late spring. The one-inch long, dangling flowers each have five upward reflexed petals and a cluster of yellow stamens surrounding a single, purplish green style that converge to a downward point. Within any population the petals naturally vary widely in color from purple to pink or rose or white. Northern populations tend to have lavender to purple petals and southern populations skew more toward white petals but there is considerable variation across its range. The base of the fused petals have uneven rings of white, yellow and maroon around the base. Flowers are visited by bumblebees and some other native bees to collect pollen, but not honeybees as the flowers do not provide nectar. Pollinated flowers are followed by erect oval to cylindrical mahogany-colored capsules ¼ to ¾ inch long that contain very fine seeds that are dispersed when wind blows the capsules. 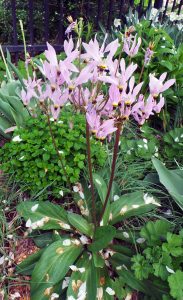 Shooting star grows best in partial shade, but can tolerate full sun in cooler zones and full shade as long as the soil is moist (but not wet) in the spring. It tolerates clay soil, but prefers humusy, rocky or sandy, well-drained soils. Since it naturally dies back in summer, drought at that time does not affect it but it does not need a dry dormant period like most of the western species do. Plant it where taller plants will not overtake it until later in the season. It is not favored by deer.

In ornamental gardens place it near the front of beds and borders where the flowers can be easily viewed. It will grow up through some groundcovers, such as Vinca minor, or position them near other slower-developing plants that will cover up the senescing foliage later in the year.
Shooting star is propagated from seed or by division in fall when dormant. It can be difficult to grow from seed, which needs to be sown fresh in summer or stratified (moist or dry) over the winter. Seedlings grow very slowly, taking 3-4 years to flower.
There are a few cultivars or forms of D. meadia, as well as the white-flowered D. meadia f. album:

D. meadia is very similar to the related, but less common (in Wisconsin, where it is found primarily in the southwestern counties on moist, shaded ledges and adjacent woods on north-facing slopes) amethyst shooting star or jeweled shooting star (D. amethystinum or Primula fassettii) which tends to have darker, reddish-purple flowers. This species is generally found in shadier locations than D. meadia and lacks a reddish tinge at the base of the foliage but the two are best distinguished by the seed capsule, which is thin-walled, flexible, and light yellowish to reddish when dry in D. amethystinum while that of D. meadia is thick-walled and firm and a much darker reddish brown when mature.
– Susan Mahr, University of Wisconsin – Madison