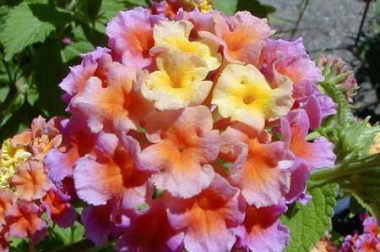 What is lantana?  The genus Lantana (also commonly known as lantana) includes more than 150 species of hairy-leaved and often prickly-stemmed shrubs and herbaceous perennials in the verbena family (Verbenaceae).  These plants are native to the tropical Americas and most are hardy only to USDA cold hardiness zone 8.  Spanish colonists were interested in lantanas for their reputed medicinal value, using them to make infusions as a tonic for the stomach or to cure snake bites.  Today, lantanas are prized for their long-stalked, flat-topped clusters of small, colorful, tubular blossoms that are attractive to butterflies.  If successfully pollinated (a rare occurrence in Wisconsin), lantana flowers produce fleshy, berry-like green fruits that turn bluish-black.  Lantanas are plants that tend to be avoided by deer and rabbits.

While valuable as ornamentals, lantanas do have some potentially problematic characteristics.  Some people find that lantana leaves have a disagreeable odor when rubbed and crushed.  In addition, leaves can cause contact dermatitis or minor skin irritation in some people.  Finally, unripe lantana berries are poisonous.

There are several species of lantana that can be used in Wisconsin gardens.  Common lantana (Lantana camara) is a small perennial shrub in its native range, but in Wisconsin is best treated as an annual.  It is popular due to its fast growth rate, and profuse production of yellow, orange or red flowers.  Trailing lantana (Lantana montevidensis) is a low-growing, spreading plant that produces a profusion of lavender, purple or white flowers.  There are many named varieties/cultivars and hybrids of lantana.  These varieties/cultivars and hybrids are more compact, bloom earlier, produce more colorful flowers, or hold their flowers better in rainy weather than the “common” type.  Some new varieties/cultivars are almost sterile (i.e., they rarely set seed) which means deadheading is not as important for continuous bloom.  Sterile varieties/cultivars are also less likely to become invasive in areas of the U.S. (e.g., Hawaii, Texas, Florida) where this is of concern.  Trailing lantanas typically have the best flowering, followed by mounding types and upright types, respectively.  There are numerous varieties/cultivars of lantana that will perform well in Wisconsin gardens.

Note that not all of the varieties/cultivars of lantana listed above may be readily available in Wisconsin.  Therefore, in order to obtain a particular variety, you may have to purchase the variety from a supplier in the southern U.S.

Where do I get lantana?  Lantana can be grown from seed or from cuttings.  Seedlings take a long time to bloom, however.  In Wisconsin’s short growing season, purchasing rooted plants is recommended.  Altenatively, you can take hardwood cuttings from plants in the fall to produce young plants for the following spring.  Lantana is killed at 28°F, so cuttings must be protected from frosts and moved indoors for the winter.

How do I grow lantana?  Lantana is easy to grow.  It does best in full sun and in moist, well-drained soil.  Lantana is heat and drought tolerant.  Too much water and fertilizer will reduce bloom.  When lantana is grown in containers, fertilize one to two times per month.  When growing lantana in flowerbeds, fertilize only when a soil fertility test indicates a need.  Plants should be deadheaded to encourage continuous bloom, by either clipping individual faded flowers, or trimming the entire plant with hedge clippers. 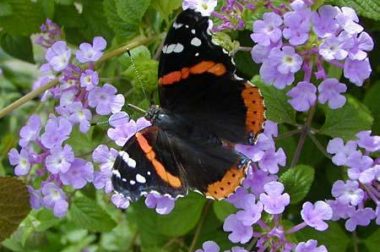