What is boxwood blight? Boxwood blight (also known as box blight and boxwood leaf drop) is a devastating disease of boxwood (Buxus spp.) that can cause leaf loss and eventual death of affected shrubs. Boxwood shrubs are commonly grown as hedges and as individual plants in home landscapes and public gardens. Boxwood blight can affect any type of boxwood (Buxus spp.) including European or common boxwood (Buxus sempervirens) Korean littleleaf boxwood (B. sinica var. insularis), and Japanese littleleaf boxwood (B. microphylla var. japonica). In addition, the disease has been reported on Japanese and Allegheny pachysandra (Pachysandra terminalis and Pachysandra procumbens respectively), two common groundcovers. Boxwood blight has been found in Europe and New Zealand, and was first confirmed in the U.S. in 2011. The disease was first detected in Wisconsin (in Kenosha County) in 2018. 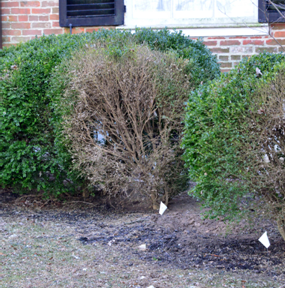 What does boxwood blight look like? Initially, brown spots appear on the leaves. The spots eventually enlarge and merge together. Infected leaves turn brown and fall off. Boxwood blight can cause total leaf loss on a shrub within days of the first onset of symptoms. Dark brown to black sunken areas can also form anywhere on the stems, leading to branch dieback Boxwood blight often kills plants shortly after all of the leaves drop. Damage from winter burn (see University of Wisconsin Garden Facts XHT1239, “Winter Burn”), dog urine and other diseases such as Volutella blight (see University of Wisconsin Garden Facts XHT1191, “Volutella Blight”) may look superficially similar to symptoms of boxwood blight.

Where does boxwood blight come from? Boxwood blight is caused by the fungus Calonectria pseudonaviculata (sometimes referred to as Cylindrocladium pseudonaviculatum or Cylindrocladium buxicola) which thrives in humid, warm conditions. The fungus is typically introduced into any area on nursery plants that are infected, but not showing symptoms. Holiday wreaths containing boxwood sprigs have also been documented as a source of the boxwood blight fungus. Once the fungus has been introduced into the landscape, spores can be easily spread by splashing water (e.g., rain or sprinklers), wind or contaminated gardening tools (e.g., pruners, shovels, gloves). The boxwood blight fungus can survive and produce spores in dead boxwood leaves and branches (including those that have fallen onto the ground) for several years.

How can I save a plant with boxwood blight? Because boxwood blight is new to Wisconsin and relatively rare, eradicating the causal fungus may be possible. Therefore, if you find boxwood blight, remove and destroy any affected shrubs. Currently, free testing for boxwood blight is available through the UW-Madison Division of Extension Plant Disease Diagnostics Clinic (https://pddc.wisc.edu/). Plants (roots and all) confirmed to have boxwood blight, as well as any leaves or branches that have fallen from these plants, should be removed and destroyed by burning, deep burying (at least two feet deep) or double bagging (in plastic garbage bags), then landfilling. DO NOT compost any parts of infected shrubs. Thoroughly decontaminate any tools used in the removal process by dipping them for at least 30 seconds in 70% alcohol (e.g., rubbing alcohol) or (as a last resort) in 10% bleach. Spray disinfectants that contain at least 70% alcohol also can be used. Spray tools until they drip and then allow them to air dry.

How can I avoid problems with boxwood blight in the future? Consider using shrubs other than boxwood in your landscape. If you decide to use boxwood, choose boxwood blight resistant varieties where possible. In Wisconsin, hybrid boxwood ‘Green Gem’, common boxwood variety ‘Katerberg’ North Star®, and Korean littleleaf boxwood varieties ‘Eseles’ Wedding Ring®, ‘Franklin’s Gem’, ‘Winter Gem’ and ‘Wintergreen’ are hardy (to USDA hardiness zone 5) and have been documented to be resistant to box blight. Always buy boxwood shrubs from local reputable suppliers who have thoroughly inspected boxwood plants for evidence of boxwood blight. Isolate new boxwood shrubs from established boxwoods for several weeks before planting, as

boxwood blight symptoms not become apparent until weeks after purchase. DO NOT plant boxwoods in areas where boxwood blight has been a problem in the past, as the fungus can survive in boxwood debris (e.g., leaves and branches) for several years. When planting, space boxwood plants far enough apart from each other, as well as other shrubs, so that branches on adjacent shrubs do not overlap. This will increase air flow between plants and promote a drier environment that will be less favorable for boxwood blight. Avoid watering plants with sprinklers or overhead with hoses; instead use a soaker or drip hose. This will limit splash of spores from plant to plant and also promote a drier environment that is less favorable for disease. 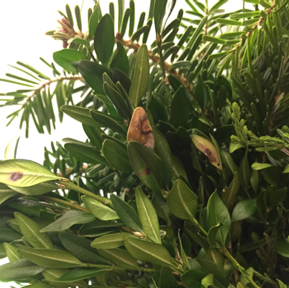 Be cautious when buying holiday wreaths or other garlands. Avoid holiday decorations that contain boxwood, whenever possible. If you are unsure whether a wreath that you have purchased contains boxwood, assume that it does and dispose of it appropriately by burning, deep burying or double bagging and landfilling as described above. Be careful to collect and dispose of any leaves or branches that may have fallen from wreaths as well. Make sure that no potentially contaminated materials end up near boxwood shrubs in your yard. Under NO circumstances should you attempt to compost any suspected boxwood materials.

Once boxwood blight has been reported near your location, you may want to consider using preventative fungicide treatments for management. Fungicides containing chlorothalonil (alone or in combination with thiophanate-methyl or tebuconazole), fludioxonil, metconazole, and tebuconazole (as a stand-alone product) have been shown to provide good control of boxwood blight if applied prior to the development of any symptoms. These fungicides will not cure existing disease. If you decide to use fungicides, you will need to treat every seven to 14 days throughout the growing season. DO NOT use fludioxonil, metconazole, or tebuconazole as the sole active ingredient for all treatments. If you decide to use one of these active ingredients, alternate its use with at least one of the other active ingredients listed above (except DO NOT alternate metconazole and tebuconazole as these products are chemically related). Alternating active ingredients will help minimize problems with fungicide-resistant strains of the boxwood blight fungus. Be sure to read and follow all label instructions of the fungicide(s) that you select to ensure that you use the product(s) in the safest and most effective manner possible.

Finally, routinely (e.g., weekly) check boxwood plants for boxwood blight. Immediately remove any symptomatic plants and fallen leaves and branches, and dispose of them as described above.