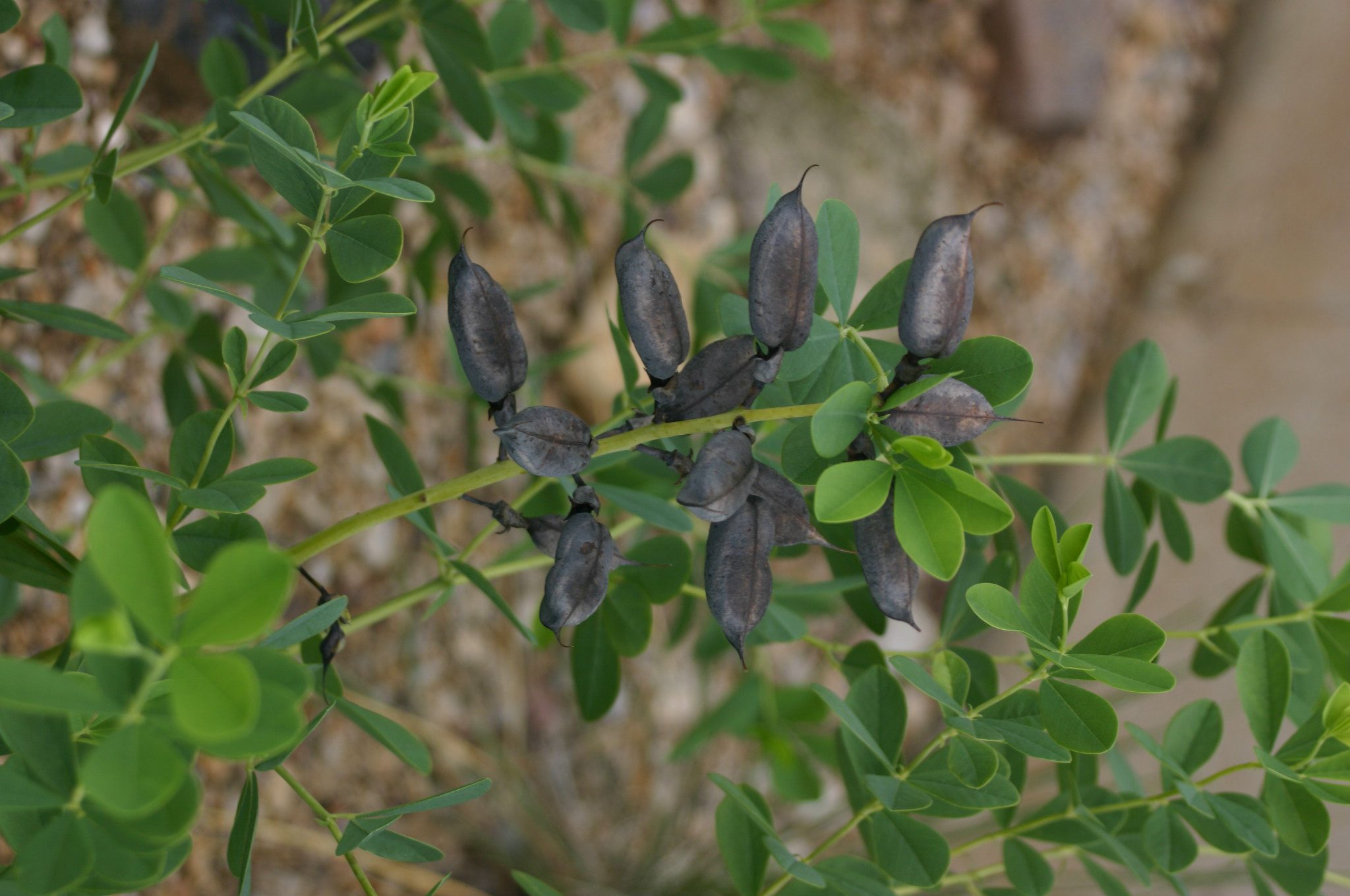 Every year the Perennial Plant Association chooses a plant of the year. For 2010 this is Baptisia australis, or blue false indigo. This long-lived perennial legume, hardy in zones 3 to 9, has long been a favorite, although underused, garden plant. Native to eastern North American prairies, meadows, open woods and along streams, blue false indigo got its common name because it was once used as a substitute for true indigo (Indigofera tinctoria, native to southern Asia) which was used to make blue dye. Other common names include blue wild indigo, indigo weed, rattleweed, rattlebush and horse fly weed. B. australis was used medicinally by Native Americans as a purgative, to treat tooth aches and nausea, and as an eyewash.

The long-lived plants grow in bushy clumps 3-4 feet tall and wide when mature. The trifoliate leaves are a soft blue-green, alternate and obovate in shape (rounded but wider towards the apex). The foliage remains attractive all season until it dies back to the ground in the winter. The stems should be cut back to the ground in late fall, winter, or early spring before new shoots appear.
Foot-long, lupine-like spires of blue, pealike flowers are produced in mid to late spring, about a month after the leaves emerge. The individual flowers in these terminal racemes are about an inch long. The color ranges from pale to intense indigo blue, with white cultivars as well. Flowering lasts for just 2-3 weeks.  The stems also make a good cut flower.

Once the flowers drop, puffy, oblong seed pods with a sharp tip at the apex develop. They eventually grow 2-3 inches long, changing from green to charcoal-black when they ripen in late summer or early fall. The mature pods contain numerous, loose tan to dark brown, kidney shaped seeds. Shaking the dry pods produces a sound like a rattlesnake – hence some of the other common names for this plant. The architectural appearance of the seed pods can lend winter interest but because of their heavy weight, they often cause the stems to flop over – deadheading will eliminate this problem, as well as self-seeding. Plants can be cut back by about 1/3 after bloom or individual stems can be pruned out at the base of the inflorescence. The big, showy seed pods can be used in dried arrangements.

Because of its large shrub-like size, blue false indigo works well as a backdrop for other perennials. It can also make an arresting specimen individually or in small groups. It is at home in cottage gardens, meadow plantings and among native restorations. The blooms add vertical interest, while the attractive foliage is a good foil for other flowers throughout the summer and fall and the seed pods can provide winter interest (if not too heavy and flopped onto the ground). It makes a reasonable substitute for lupines in areas where they are difficult to grow.

B. australis is easy to grow in the right location. It does best in full sun, although it can tolerate light shade. It does not flower as profusely and may need staking if shaded. It is tolerant of most soils as long as they are well-drained, preferring gravelly, sandy or well-drained loamy soils. The plant does not bloom well in acidic soils, so adding lime in those conditions can improve flowering. Keep well-watered until established, after which time it is drought tolerant. Overwatering may cause the stems to flop over. Because it can fix nitrogen in the soil like most legumes, it does not require much fertilization. Deer do not favor this plant and it has few other pests. Weevils often infest the seed pods, however, making the number of viable seeds very low.
Blue false indigo has a deep tap root and extensive root system so is best left undisturbed. It can, however, be transplanted or divided in cool weather if kept well watered until re-established. If it needs to be divided, early spring is the best time before the new shoots have elongated.

The species is easily started from seed, although the seed needs a minimum of 4 weeks of cold stratification or scarification for best germination. Seed coats can be scraped with a file, and/or soaking the seeds in hot water overnight improves germination. Plants started from seed take 3-4 years to flower.
This species has been used in several Baptisia hybrids, including ‘Purple Smoke’ (B. australis var. minor x B. albescens) and Twilight PrairiebluesTM (Baptisia x variicolor ‘Twilight’, a cross of B. australis and B. sphaerocarpa). The variety B. australis var. minor (sometimes classified as a separate species, B. minor), which is only 1-2 feet tall, is sometimes available as a garden plant.
– Susan Mahr, University of Wisconsin – Madison